October is an exciting time for movies. Thanks to Halloween, the month is prime real estate for horror movies and other genre films. Not only that, but it’s also smack dab in the middle of Oscar season. Whatever you’re into, October has something for all movie lovers!

This October in particular has me quivering with excitement. There’s something to look forward to each week! Here are the films I’m most looking forward to next month:

Ridley Scott’s original Blade Runner from 1982 is a seminal sci-fi motion picture. Its influences on subsequent films can be seen and felt through the years. That said, I never believed the film needed a sequel. I still don’t. However, it’s tough to say no to the talent involved. Denis Villeneuve (Prisoners, Arrival) is arguably the hottest director in Hollywood today. Likewise, Ryan Gosling is arguably the hottest on-screen talent in the industry right now and the draw of putting him opposite Oscar-winner Jared Leto (Dallas Buyer’s Club) is irresistible. Cinematographer Roger Deakins has shot some of the most transfixing images in cinema history (The Shawshank Redemption, A Beautiful Mind, Skyfall, Sicario) and by the look of it, he’s immaculately recaptured the iconic, neo-noir styling’s of the original. Team those four up with returning Blade Runner veterans like Hampton Fancher (screenwriter) and Ridley Scott (producer) and then say Harrison Ford will be reprising his role as Deckard? Take my money.

I know two things about The Florida Project and its originator Sean Baker: 1.) The guy’s previous works include Tangerine, which was shot on an iPhone, and 2.) I saw the trailer once and have been sold ever since. Willem Dafoe is one of my favorite under-appreciated actors and he always shines in these smaller, independent titles (though judging by the trailer, I’m not so sure how much screen time he’ll get). However, the real highlight of what I’ve seen so far is Brooklynn Prince. The young actress just oozes charisma and seems like a perfect fit for the role of a snarky, rebellious child. Her credits don’t include much up to now, but if this film is as charming and sincere as it looks, The Florida Project could be a star-maker.

I love horror. It’s my favorite genre. I especially love slasher flicks. Psycho, Peeping Tom, Halloween, and Scream are some of my all-time favorite films. Happy Death Day seems to be paying homage to those types of movies while having fun in the process. From its Halloween-inspired cake poster to Jessica Rothe’s indulgently silly performance to the Groundhog Day manipulation of time to the killer’s oversized mascot helmet, everything about this film looks ludicrous and amusing. Count me in for a slice.

Jackie Chan is a cinematic icon who’s known for doing his own, insane stunt work and fight choreography. Lately, the martial arts legend has withdrawn from the spotlight and mostly taken up work voice acting in family-friendly animations such as the Kung-Fu Panda films and the recent sequel to The Nut Job (which he was the best part of, I might add). With The Foreigner, Chan resurfaces to the public eye with a good, old-fashioned revenge tale and I for one can’t wait to see the honorary Oscar-winner do what he does best: kick some serious ass. Plus he’s teaming up with Martin Campbell, who’s proven to be a competent action director with GoldenEye, Casino Royale, and the Antonio Banderas-lead Zorro films. It doesn’t hurt that Chan is starring opposite someone as talented as Pierce Brosnan. Plus, it’s always fun to see a previous Bond star play a villain.

Dr. William Moulton Marston is famous for three things: creating Wonder Woman, inventing the lie detector, and being in a polyamorous relationship with two women. With Professor Marston & the Wonder Woman, the story of the women behind the man behind the woman (as the film’s tagline goes) finally gets the silver screen treatment it deserves and it couldn’t come at a better time. From the initial controversy of the Wonder Woman comic itself to the scrutiny surrounding the relationship that influenced its creation, this story is ripe with timely, dramatic potential. Not to mention the film stars Luke Evans and Rebecca Hall, two phenomenal actors no doubt worthy of such rich material.

Again, The Snowman is a film I know very little about and I’m doing everything in my power to keep it that way. That said, I do know Director Tomas Alfredson helmed Let the Right One In, which is a poignant, disciplined example of dramatic horror. If he can bring those same sensibilities to a methodical, cat-n-mouse murder mystery like The Snowman and effectively utilize the prolific talents of an actor like Michael Fassbender, then I’m totally game. Not to mention the bizarre imagery in the trailer has haunted me ever since I watched the damn thing. It begs questions that I must know the answers to!

It seems odd, doesn’t it? Placing the eighth installment of a horror franchise on any “Most Anticipated” list? Maybe. But keep in mind there hasn’t been a new Saw movie in seven years. That’s the better part of a decade and exactly how long the series initially ran once James Wan (Insidious, The Conjuring) flipped the switch back in 2004. Babies born that year are starting grade school this year! In other words: it’s been a minute, so you’ll have to excuse my enthusiasm for Jigsaw. Plus it’s being directed by the Spierig Brothers, who are responsible for one of my all-time favorite films in Predestination. Sure, their films don’t always stick the landing– ahem, Daybreakers— but they’re always brimming with creativity, which is exactly what a long-running franchise like this needs. So cue up the tapes, Billy, papa wants to play a game!

Thank You for Your Service

I haven’t read the David Finkel novel that Thank You for Your Service is based on, but by all accounts, it’s a powerful read. That comes through in the trailers. PTSD is a tragic reality for a lot of vets returning from active duty. While many films attempt to communicate the devastating effects that the disorder can have on the lives of those who suffer from it, not many movies delve into how it affects the lives of those closest to them. Thank You for Your Service, at least judging from its trailers, seems to be all about that family dynamic and Haley Bennett with Miles Teller seems to be a perfect matching. Thankfully, over the last few years, Miles Teller has dug himself out of being typecast as the frat boy/ YA heartthrob and established himself as a serious actor thanks to his work in films like War Dogs and Whiplash. Thus, I have complete faith that he’ll dedicate himself whole-heartedly to this role and do right by those living his character’s reality.

The Killing of a Sacred Deer 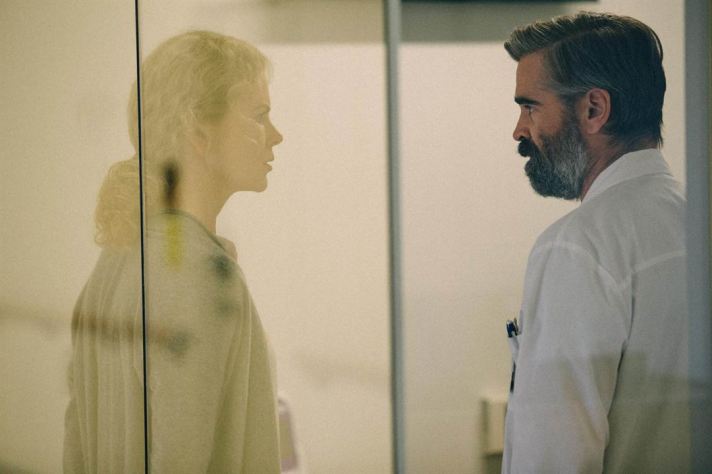 I’d hate to sound like a broken record, but The Killing of a Sacred Deer is yet again one of those upcoming films that I know next to nothing about. I, however, absolutely adored The Lobster, a 2015 film also written and directed by Athenian filmmaker (you don’t hear that very often) Yorgos Lanthimos. That film also starred Colin Farrell, who is one of my favorite actors, period. The addition of Nicole Kidman can only be a positive thing. The two always commit themselves to their work, disappearing into every role. Plus the synopsis for The Killing of a Sacred Deer promises a “sinister” turn and both Farrell and Kidman excel given edgier material.

Obviously, I’m a fan of when big-name Hollywood talents team up to make a movie. I crossed that bridge with Blade Runner 2049 and The Snowman (see above). This time around, George Clooney is pairing with Matt Damon to realize a script written by Joel and Ethan Coen. Now George Clooney as a director tends to be hit or miss, but the fact that he’s been around a while and has previously crafted some strong cinema (Good Night, and Good Luck; The Ides of March) means that I’m willing to give him the benefit of the doubt when it comes to Suburbicon (at least for now). Plus, the Coen Brothers are such a singular voice in the industry and I’ll watch anything they’ve put their hands on. It also helps that Matt Damon has the chops to match their quirky wit.

Those are my ten most anticipated movies of October. What movies are you guys and gals looking forward to next month? Anything I missed? Drop down into the comments section and let me know!