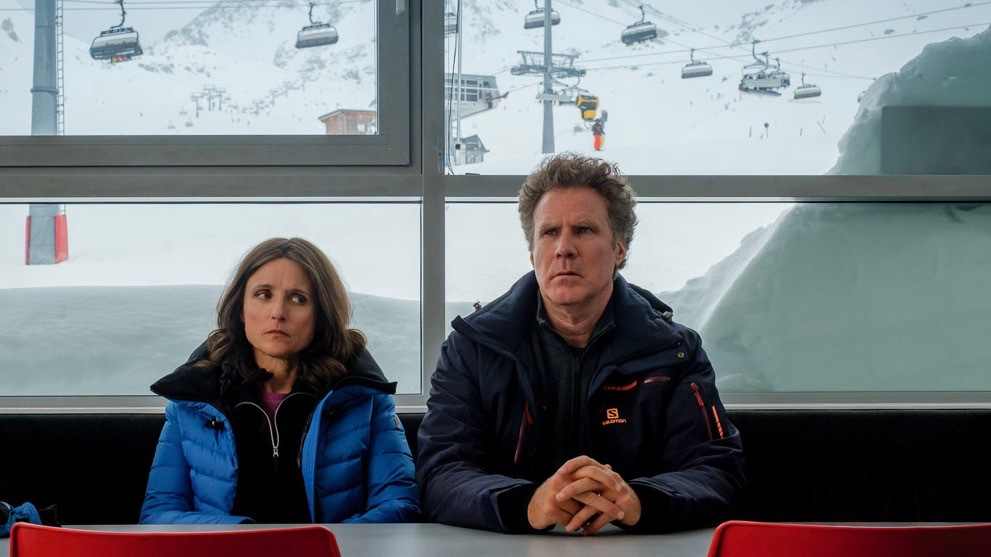 It’s a beautiful day and you’re planted on the deck of a luxurious ski resort in the Alps, enjoying a warm breakfast before tackling the freshly-powdered slopes when you’re threatened by an oncoming avalanche. What do you do? If you’re Pete Staunton (Will Farrell), you instinctively haul ass, abandoning your wife (Julia Louis-Dreyfus) and two kids to almost certain death. Moments later, the powder settles. Everybody’s fine, physically at least. Turns out it was just another in a series of routine “controlled avalanches.” This revelation forces Pete and Billie to re-examine themselves as well as their relationship. That’s the setup for the critically-acclaimed Swedish dramedy Force Majeure and its new American counterpart, Downhill.

With headliners like Will Ferrell and Julia Louis-Dreyfus, you could be forgiven for assuming Downhill was some wacky ski comedy featuring schlocky slapstick humor. Mercifully, co-writers and directors Nat Faxon and Jim Rash (the pair previously won the Oscar for penning The Descendants) intended for something with a bit more substance. The actual realization of said intentions, however, isn’t as merciful.

As a comedy, Downhill repeatedly falls flat on its face (not unlike a newbie slipping on a pair of ski boots for the very first time). Though I occasionally caught myself grinning, I spent much more time wincing at stiff gags and awkward dialogue.

As a drama, Downhill stalls. Faxon and Rash fail to capitalize on key emotional beats. Repeatedly, the film threatened to suck me into it with stirring– and inconsistent– performances and briefly intriguing perspectives on life, commitment and the inevitability of death, only to lose me again with more unfunny attempts at humor and shallow character work.

For most of the second half of the film, Ferrel and Louis-Dreyfus aren’t on screen together. Instead, each spouse takes a turn bonding with bland side caricatures who desperately want to make you laugh but rarely do. It’s a questionable decision because the scenes between the two leads are what make Downhill watchable.

Have you had a chance yet to check out Downhill? If not, is it something you plan on getting around to? Why or why not? Sound off in the comments below and let me know your thoughts!