The Most Chilling Shots In Horror Movie History: An Odyssey Of Anxiety (Part I)

Horror movies are meant to instill fear in us, but some are more effective than others. The very best horror movies haunt us long after the credits roll. A lot of the time we can trace that lasting impression back to a single shot from the film, an image that gets under our skin so deep that it forces us to reexamine the otherwise banal people, place and things from our daily lives.

Horror movie history is paved with such shots, so I thought it’d be fun to revisit some of the most chilling shots ever put to a screen. Fortunately, there are so many to choose from that this will definitely justify multiple posts. Grab your favorite blanket, flip on the nightlight and join me on this odyssey of anxiety!

**CAUTION: THIS POST CONTAINS SOME SPOILERS FOR DIFFERENT MOVIES. YOU’VE BEEN WARNED.** 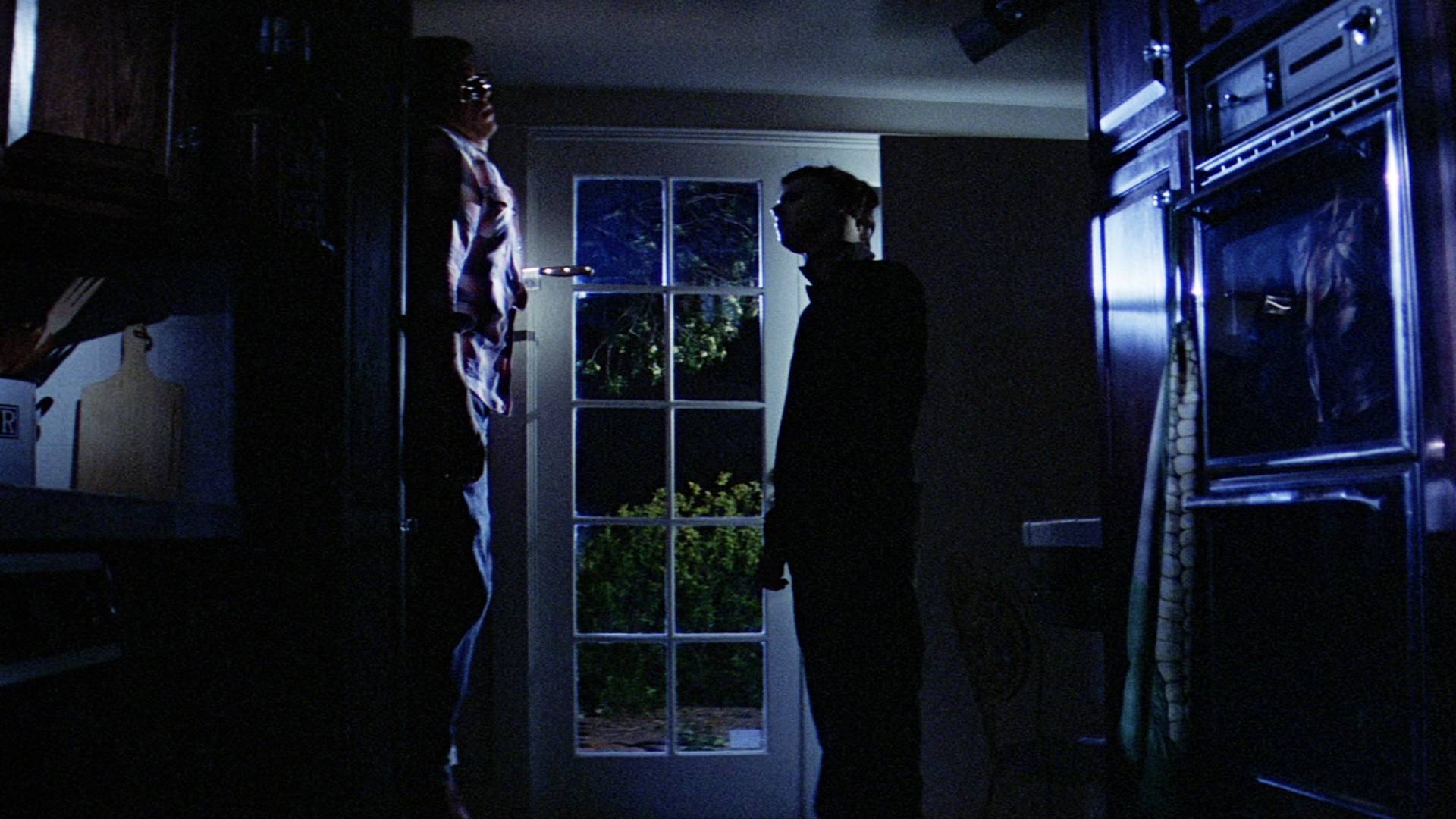 Halloween is the father of modern slasher films. It introduced and cemented many of the tropes we now roll our eyes at. What’s more, it did so without buckets of blood; instead, director John Carpenter leaned into the enigma of The Shape; a soulless, masked maniac who seemingly murders at random and because he enjoys it. That’s what makes this particular shot so chilling. Michael’s expressionless face tilts side to side, denoting a twisted fascination with the lifeless kid he just pinned to the wall, like a painting to be admired. A killer who sees his trail of horrors more like the handiwork of an artist? Yikes!

We all want to feel safe wherever we are. Not having that security is the basis for home invasion thrillers like 2008’s The Strangers, which can be summed up in the above image. As the Man in the Mask slowly creeps into frame, we immediately know that any sense of safety from here on out is false. The titular strangers are already in the house; they just get a kick out of playing with their victims first and that’s made bone-chillingly clear in this shot.

M. Night Shyamalan’s Signs is a sci-fi spin on the home invasion sub-genre that boasts a handful of brilliant scares and chilling imagery. While the lizard foot in the cornstalks came close to making my list instead, I find this image more foreboding. Though it’s shrouded in darkness, there’s enough context to pick up on two sure things: 1. The alien possess a formidable physique and 2. It’s starring straight at us. This pair of observations is all it takes to make your stomach drop.

The Descent is a viscerally disturbing double-bill. What starts out as a claustrophobic, white knuckle women vs. nature thrill ride takes a hard left halfway through to become a blood-curdling creature feature. It’s here we get the shot; the dimly lit reveal of the Crawlers by way of a shaky action cam. It’s quick, lasting mere seconds before panic breaks out among our leading ladies. Still, those seconds are palpable, allowing just enough time for your brain to piece together what’s happening before realizing that the girl in the shot has no clue what’s behind her and that’s the most chilling thing of all.

This has got to be one of the most infamous shots in all of horror. Admittedly, it comes as the cap to a not-so-scary (but still pretty fun) scary movie. That said, there’s no denying the raw shock value that’s on display here. If a picture truly is worth a thousand words, then chances are I’m nothing to you at this point but redundant noise rattling through your head. Best we just move on.

If you’re like me, you gagged all through Eli Roth’s body horror extravaganza Cabin Fever. If you’re more like me, you found this shot particularly off-putting. While you can definitely chalk “flesh-eating virus” up under “Gross,” discovering you’re the proud owner of a flesh-eating virus by way of meat peeling off your leg like grated cheese while shaving in the bathtub is even more upsetting. Not only is it a disgusting image, but it overtly violates the vulnerability of our special time in the bathroom.

If Halloween is the daddy of the modern slasher, then Black Christmas is the granddaddy. It marked the first time many of the sub-genre’s cliches came together in one film. During the film’s climax we discover that the killer’s harassing phone calls have been coming FROM INSIDE THE HOUSE all along! When the last surviving sorority sister learns this and runs upstairs to check on her sleeping roommates, she finds them dead; a voice whispers out to her from the darkness: “It’s me, Billy! Don’t tell them what we did, Agnes!” That’s when the camera pans over, revealing the wild eye of the killer staring back through the closet door. It’s an unsettling revelation but an even chillier image thanks to the scared and bewildered look in Billy’s eye. 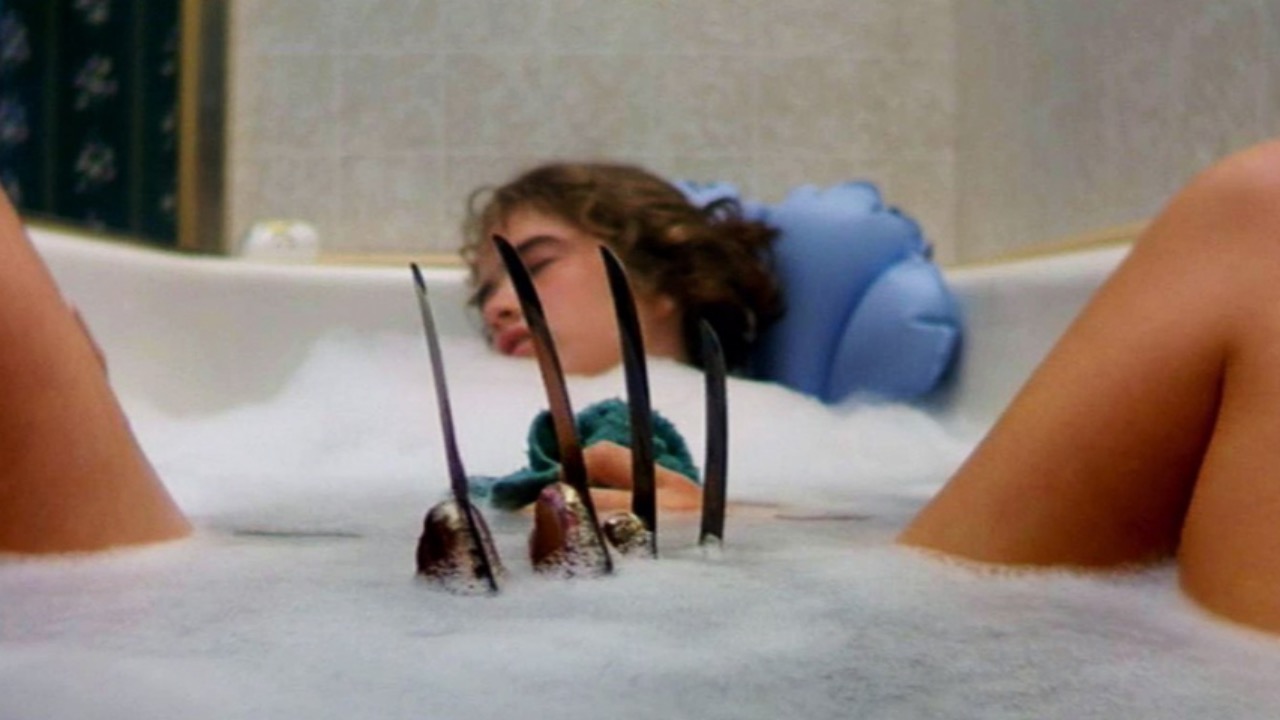 Similar to the aforementioned moment in Cabin Fever, this shot from Wes Craven’s A Nightmare On Elm Street thrives off our fears of being taken advantage of while we’re at our most vulnerable. As if being ravaged in your sleep was t a scary enough proposition, there’s something especially distressing about a teenaged woman being assaulted in the bathtub by an undead child molester with knives for fingers. It’s enough to make any moviegoer instinctively close their legs in disgust.

True terror never dies. Such was the case when Nosferatu first hit screens back in 1922 and such is still the case today. Much of that can be attributed to the film’s harrowing imagery, none more iconic or chilling than the German vampire sneaking up the staircase to feast on his next victim. Nobody likes an unwelcome visitor, less one with such an monstrous silhouette. This single shot is arguably more chilling than anything from any of the Dracula films that followed, which is funny because Nosferatu is a not-so-subtle rip-off of Bram Stoker’s bloodsucking masterpiece.

There you have it! Those are my first round of picks for the most chilling images from horror movie history! There’s plenty more to come in this odyssey, but jump down to the comments below and let me know what you think of my first ten! I’d love to hear your thoughts!