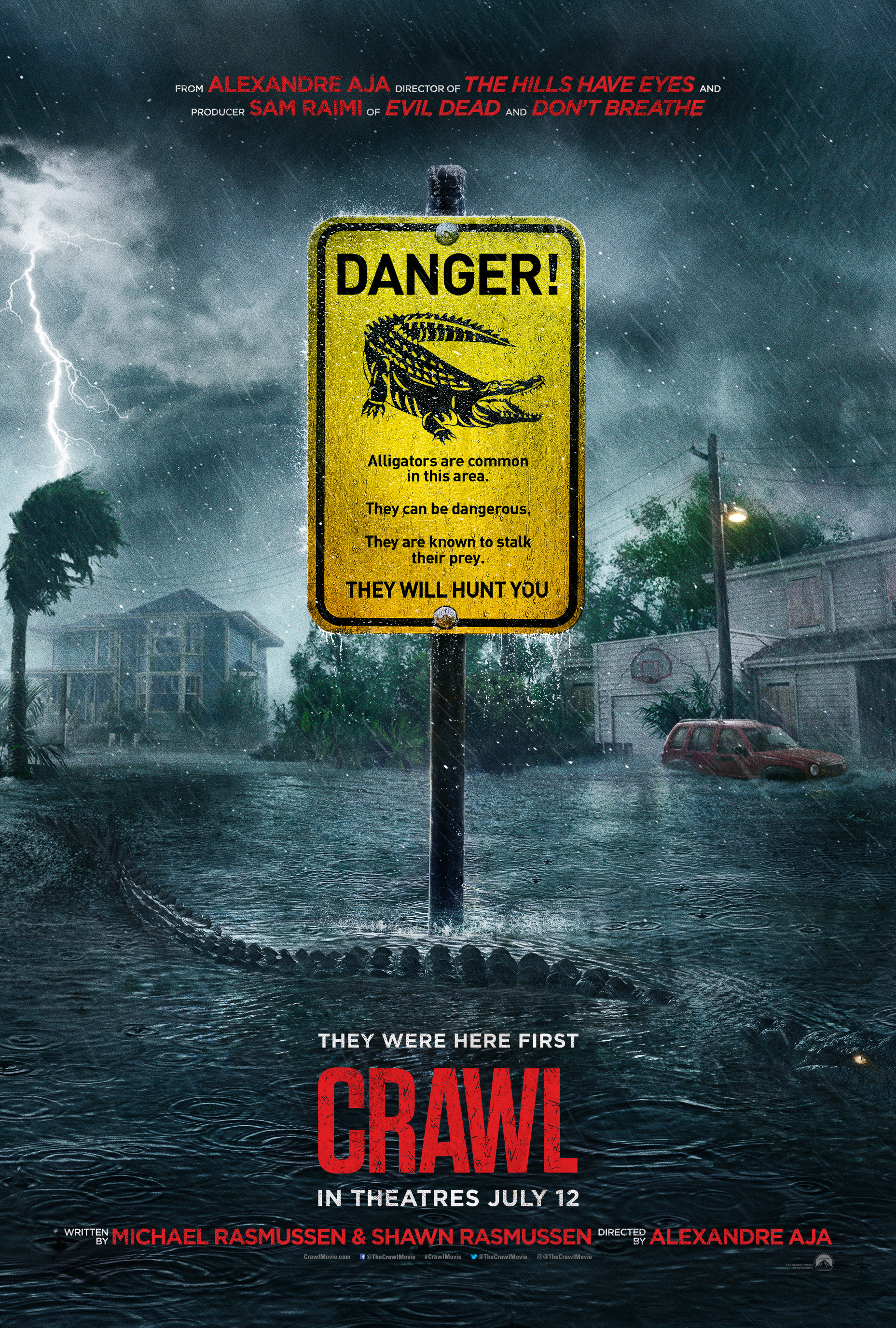 After a decade away, director Alexandre Aja (The Hills Have Eyes, Piranha 3D) returns to the big screen with Crawl. The result is something we don’t see much of: a gruesome and self-assured survival horror flick that’s both effectively startling and surprisingly heartening. It’s a bizarrely satisfying package where everything that can go wrong does and the perfect excuse to beat the summer heat for a brisk 83 minutes.

Aja hardly wastes a frame here. Right away we’re introduced to Haley (Kaya Scodelario), a swimmer for the University of Florida who learns that her father Dave (Barry Pepper) has gone AWOL since the recent hurricane made landfall. The young athlete decides to brave the wild weather and check in on her Pops in person.

It’s quickly evident why this film is called Crawl. Haley finds her father trapped in the flooding crawl space below their old house with torrential overflow surging in through every imaginable crevice. Now this would qualify as a nightmare scenario in most anybody’s book; however, this wouldn’t be an Alexandre Aja film if innocent characters weren’t going to have their limbs dispatched in spectacularly brutal and bloody fashion.

Enter actual Florida gators. They’re hungry and can’t wait to chomp down on Haley and Dave, who are quickly running out of time and options.

Once inside the crawl space, Aja’s Jaws-inspired, claustrophobic camera work had me feeling trapped alongside Haley and her father during their savage struggle to stay alive. More than once I plead with characters to not do something or to not go somewhere just so I wouldn’t have to come face-to-snout with the razor-toothed reptile that was inevitably going to breach the darkness and ferociously lunge towards me jaw agape as if to welcome me to its digestive tract. No thank you!

As much of a rush as it is watching one of nature’s most effective killing machines do what comes natural to them, the moments in between the deaths are what make Crawl stand out from the congregation of similar survival thrillers. In these moments, Aja expertly keeps the tension afloat while allowing his two stars to shine. Kaya Scodelario (who you might recognize from Pirates of the Caribbean: Dead Men Tell No Tales) displays a star-making magnetism. She gives a visceral performance that anchors the heightened peril of the film from moment to moment. Barry Pepper is every bit as good and the two share such a natural chemistry that I was immediately sold on the story of their strained relationship.

In the spirit of trying to keep things in perspective, Crawl isn’t anything we haven’t seen before; and admittedly, it gets a bit silly at times. That said, it enjoyably delivers everything it promised and then some; including gnarly, exhilarating action and a pair of grade-A performances.

PSA: there is a dog in this movie (a real cutie, too!). If you are not a fan of the idea of house pets in peril, then you may not enjoy Crawl.

Have you had a chance yet to check out Crawl? Is it something you’re even interested in watching? If so, what did you think? Paddle down to the comments section below and let your thoughts be known!