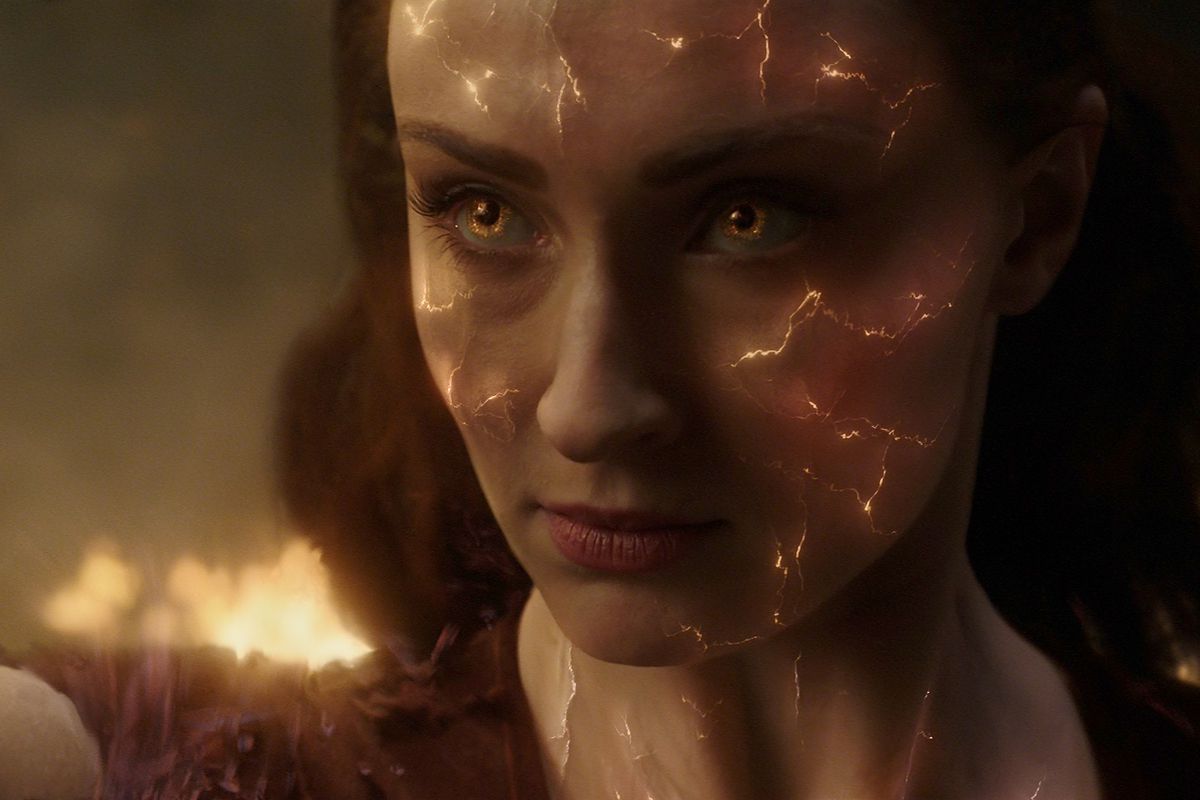 From the ashes of the middling Apocalypse (2016) comes Dark Phoenix, the 12th film in the 20 year-old X-Men franchise, at least from 20th Century Fox. Disappointingly, Phoenix isn’t exactly the swansong that these enduring Mutants deserve. It’s also not quite as disastrous as the punishingly awful X-Men Origins: Wolverine (2009).

For the first time in franchise history, the X-Men blast off into outer space. Their mission: rescue the survivors of a doomed NASA launch. The film wastes no time in getting there, either. Mere minutes after the title card, our heroes are frantically teleporting survivors from the shattered shuttle to the X-Jet in a race against the clock. It’s a thrilling sequence. That’s when Jean Grey (Sophie Turner), a telekinetic telepath, absorbs a cloud of super-powerful, super-sparkly space dust that endows her with more power than she can control.

Back on Earth, Jean begins experiences violent emotional outbursts as well as fits of possession during which she takes pleasure in the total annihilation of everything and everyone in her path. As harrowing as this all sounds, most of it amounts to little more than a two-hour string of emotionally weightless teary-eyed exchanges between X-Men and X-Women because Jean herself demonstrates no agency. She is a living MacGuffin, motivating  “the real heroes” from plot point “A” to plot point “B” all the way through the story until a very precise moment during the climax. By then, so much of the story of Dark Phoenix has felt so surgical that by the end, nothing feels like it was deserved.

It’s difficult to take a film seriously when the dialogue is unnaturally clunky and frequently cheesy. “Nobody would ever say that, especially in this moment!” is a thought that often crossed my mind. Not to mention I lost count of how many times Turner choked on the line “I don’t know what’s happening to me!” or another Mutant assuredly declared “That’s not the Jean that I know!” After an hour, the melodrama in Dark Phoenix was beginning to feel more like a bad joke.

While Turner’s Jean is unfortunately stilted, writer-director Simon Kinberg explores some interesting new ground with some of our other other favorite X-folk. Without going into spoilers, Nicolas Hoult has much more to do as Beast here than any previous entry and the young actor effortlessly bares the extra weight. Meanwhile, Dark Phoenix examines Charles Xavier, headmaster of the School for Gifted Youngsters and leader of the X-Men, through a darker lens than we’re used to. This makes for a couple of truly captivating moments and as usual James McAvoy is a force to be reckoned with from the wheelchair.

The rest of the cast largely give terrific performances. The predictably unfortunate exception is Jennifer Lawrence as the blue shape-shifter Mystique. Yet again, Lawrence seems to be appearing in an X-Men film against her will, at least that’s what her work implies. Jessica Chastain joins the roster this time out as the main antagonist, who’s come to Earth from another world seeking the Phoenix Force for her own exploits. Disappointingly, Chastain doesn’t make much of an impact on the story and like a lot of other characters, her main goal is to simply exist. Special recognition should go to Sophie Turner as Jean, who demonstrates some strong work despite not being given much to go off other than being really, really sad. Michael Fassbender also stands out, particularly during one scene wherein he desperately needs to know “Whose blood is that?”

Dark Phoenix doesn’t soar to the heights of previous X-Men films (Days of Future Past and X2: X-Men United immediately come to mind), but it does boast some moments of sincere implication. That’s more than I can say for that one Wolverine movie.

Have you had a chance yet to check out Dark Phoenix? If so, what did you think? Were you a fan of FOX’s final X-Men movie? Or did you think it was a letdown? Jump down to the comments below and let me know!