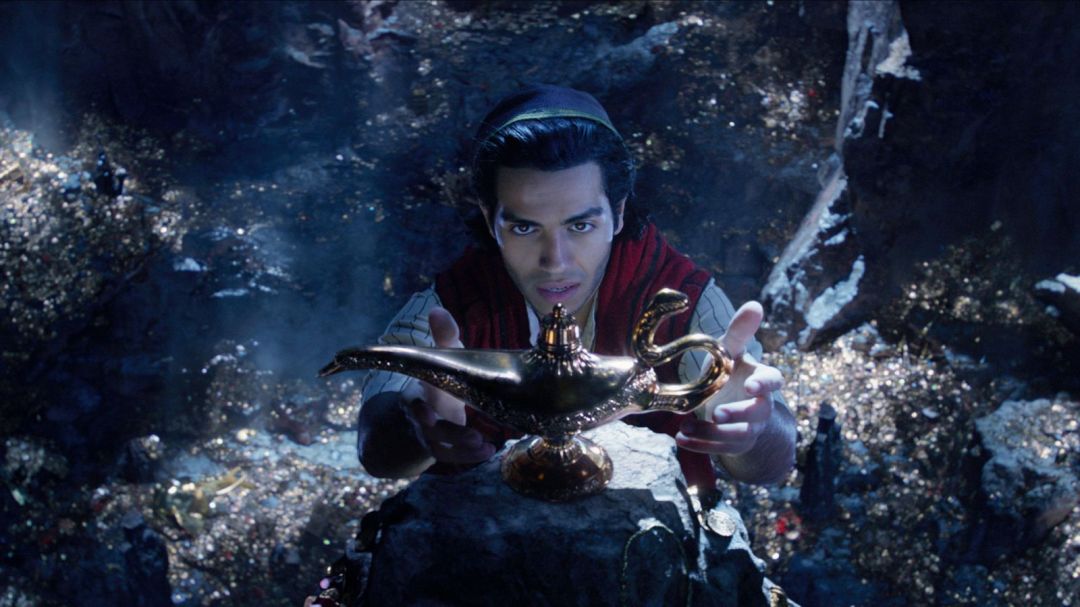 I think it’s fair to say that Disney’s live-action remakes have ranged wildly from charming (Cinderella) to confounding (Maleficent). Aladdin experienced a turbulent marketing campaign that seemed to suggest the film would fall closer to the latter than the former. Many criticized the film’s trailers for looking too over-produced as well as their lack of character interactions and some questionable visual effects work on Will Smith’s Genie. Now that the film is close enough to rub, I am relieved to report that this Aladdin is more Cinderella than Maleficent.

Egyptian actor Mena Massoud mostly does a nice job slipping into the sandals of Aladdin, a so-called “street rat” with a heart of gold who literally makes a living by stealing from vendors at the market and spends his days dodging various pursuits throughout the sandy streets of Agrabah. It’d be closer to the truth to call Aladdin’s cons “magic tricks” and his escapes “monkey-like acrobatics.”

Speaking of monkeys, Aladdin is always accompanied by his prehensile partner in crime, Abu, who is in fact a capuchin monkey and a cutie pie. The dusty duo eventually come to the unknowing rescue of Princess Jasmine (Naomi Scott), who is being harassed by a greedy salesman and– you guessed it– a chase ensues. But this is a musical, so as they make their getaway, Massoud breaks into a catchy show tune (one of a handful of new ones written just for this Aladdin).

This brings me to my biggest issue with this film. Its two biggest stars, Mena Massoud and Will Smith (who’ll we’ll get to in just a moment), are responsible for singing the majority of the songs. Unfortunately, neither of them are professionally trained singers. IT’S A MUSICAL AND TWO OF THE THREE LEADS CAN’T SING. Their voices are wet blankets over a playlist of iconic Disney tracks.

Fortunately, most of the musical numbers are flashy and energetic enough to distract from Massoud’s and Smith’s disappointing input. The one exception here is the classic Prince Ali set piece. The dance choreography is tired and the way director Guy Ritchie (Sherlock Holmes, Snatch) stiffly shoots the sequence, it is obvious he has never done a musical before.

Singing aside, both Massoud and Smith demonstrate more than enough charm and charisma. It took me a few minutes to warm up to Smith’s Genie. His first few minutes out of the lamp play out like a low rent Robin Williams impersonation, despite the lackluster hip-hop rendition of Friend Like Me. Eventually, Smith won me over with an endearing portrayal of Genie’s more vulnerable side that felt more at times like the actor was revisiting his iconic Hitch character than giving us his own spin on the larger-than-life Genie.

Facing off against our unlikely heroes is of course the nefarious Jafar (Marwan Kenzari), adviser to and coveter of the Sultan’s (Navid Negahban) throne. He is drawn pretty much as two-dimensional as they come. More power and how to achieve it are the only two things that ever occupy his mind. Kenzari brings more swagger to the role than I’m sure was asked of him by the script and hams up his traditional villain dialogue just enough to make his performance memorable.

Last but certainly not least we have Naomi Scott, whose performance as Princess Jasmine is simply the most magical aspect of this new Aladdin. Not only does her performance stand out above the rest, but her singing brings a whole new world of professionalism and sincerity to the film as a musical production. Scott is after all the only professionally trained vocalist among the cast and the only negative thing I will say regarding the actress in the role is that she doesn’t get to belt her first beautiful bars until halfway through the film, which is a shame.

In a world where the original animated Aladdin still exists and still holds up, I would be hard pressed to recommend you check out the 2019 version first or swap the two out completely. Still, there’s enough fun to be had here with a cast whose charm alone almost makes up for their lack of pipes. And if nothing else, Naomi Scott as Jasmine is a revelation and arguably the best thing any of these Disney live-action films have ever done.

Have you had a chance yet to check out the new live-action Aladdin? If so, what did you think? Did it make like the magic carpet and sweep you up? Or do you still prefer the original cartoon? Maybe both? Jump down to the comments section and let me know what you think about this movie!