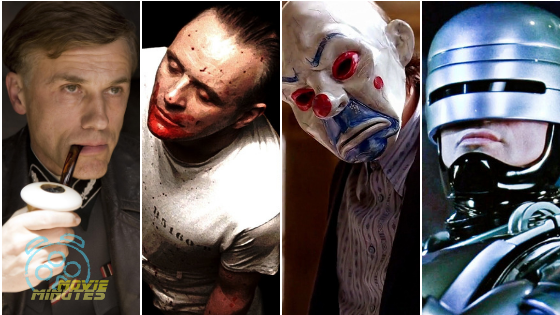 You only get one chance to make a first impression. The saying is true in life and in the movies. Your first few minutes with a character on screen can shape how you feel about that individual and even the journey they go on for the rest of the film. That’s why a character’s introduction is important and that the execution of said introduction clues us, the audience, into the information critical to understanding how and why the character does what they do. There is an art to establishing your main characters, but most tend to be pretty forgettable. Still, there are plenty of great character setups in film history that both audiences and filmmakers can take ques from.

If you haven’t already checked out Part 1 of this list, you can do so here! Now let’s take a look at the rest of my picks for the best character introductions in film: 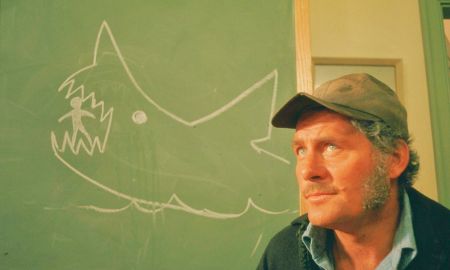 Quint’s introduction in Steven Spielberg’s Jaws needs no introduction. It’s so iconic that creators still allude to it today. Concerned Amity citizens crowd a small town hall, speaking over top of each other while the mayor and Police Chief Brody fail miserably to communicate their plan to end a recent string of shark attacks that have left a handful of swimmers dead. An unpleasant screeching from the back draws the attention of the room. Cut to the hand of a scruffy seaman who’s grinding his nails against a dusty chalkboard. The camera slowly pans around the crowd until Quint comes into view. Mumbling and smacking on lunch, Quint offers authorities his shark-killing services and manages to negotiate his own price. Obviously, Quint is a shrewd businessman. At the same time, we never doubt his reported expertise. His blasé attitude and casual body language tell us Amity needs him more than he needs Amity. Plus crude chalk drawing of a shark eating someone is a funny play on Quint’s ultimate demise.

Dr. Hannibal Lecter– The Silence of the Lambs 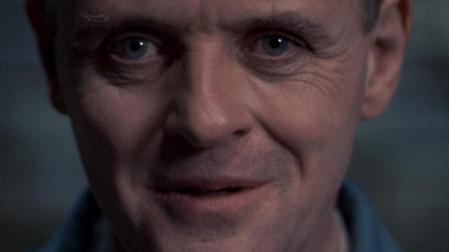 Anthony Hopkins as Dr. Hannibal Lecter made a fittingly chilling first impression when he walked onto the scene in The Silence is the Lambs. Actually, it was Jodie Foster’s Agent Starling who did the walking, and down a dark stretch of maximum security prison cells occupied by some the most disturbed minds in Baltimore, maybe even the world. The camera cuts to her POV as she approaches the last cell on the left. Dr. Lecter stands eerily motionless at the edge of his methodically tidy confinement. A thick glass wall stands in for iron bars, an immediate indicator that Lecter is more dangerous than the rest of the criminals in this prison. He wears a knowing and unsettling smile face. Right away we can tell that Lecter is meticulous and habitually more prepared than anyone else in the room. 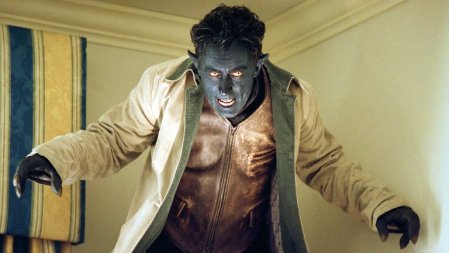 After the original X-Men proved that Hollywood could bring larger-than-life comic book storytelling to the silver screen in a financially viable and socially relevant manner, the sequel X2: X-Men United opened with a stunning BAMF! in a world still reeling from 9/11. A mysterious figure wanders off from his group during a routine White House tour. When security approaches the man, he looks up, revealing unnaturally yellow eyes as a blue tail emerges from his overcoat. The guard goes for his gun, but the creature quickly knocks him down and disarms him with his tail. The rest of the guards and the camera similarly struggle to keep up with Nightcrawler as he zips and zaps down the many corridors like a circus acrobat, appearing and disappearing into puffy blue clouds and knocking Secret Service members out cold on his way to the Oval Office, which has been locked down. It’s an exciting, well-paced and well-choreographed action sequence and one that sets up Nightcrawler as a physical threat as well as a nimble, swift thinker and improviser. 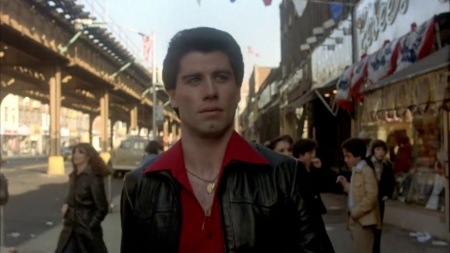 Tony Manero’s strut down the Brooklyn sidewalk during the opening of Saturday Night Fever is instantly recognizable. Even if you haven’t seen the film, chances are you’ve seen this sequence referenced in some television show or movie. When Tony first steps into frame, he stops to admire a pair of nice dress shoes sitting in in a nearby window. He lifts his legs to compare them with the shoes he’s wearing. Right away we learn that Tony takes pride in how he looks. As he swaggers off, his iconic stride perfectly matches the beat of Stayin’ Alive by the Bee Gees. The camera tilts up. Tony’s carrying a can of paint– he’s a working man– and a leather jacket adorns a neatly-pressed shirt that’s loosely unbuttoned at the top. Tony’s hair is well slicked towards the back. He exudes confidence and digs disco. 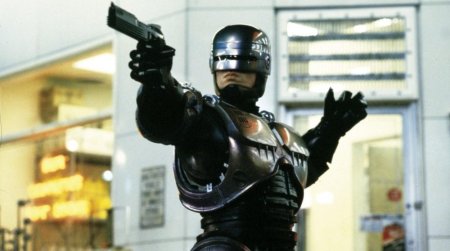 After Officer Murphy is brutally (and I meant brutally) gunned down early in the film, the anticipation starts to build. How will the nearly deceased man of the law make the transition over to the titular Robocop? The film deliberately takes its time in the reveal. First we get a POV from Murphy. His vision is digitized and all sorts of data flashes across the screen, helping him process what he’s seeing like a robot. Eventually, Robocop makes his appearance at the Detroit police station. Though he’s obscured behind tinted glass, we hear his heavy, electronic footsteps. The first sign of Murphy’s newfound power. His fellow cops look on in amazement. The camera follows from behind as they all run to the window to get a better look. We are similarly anxious to check out Robocop. Cut to the compliment cop who’s surrounded by businessmen and scientist, all explaining various aspects of Robocop’s newfound programming. Then we get a nice shot of the shooting range inside the station. A line of cops with their hands on the triggers. The camera dollies towards the hand on the end. Robocop grips am advanced sidearm before he places it back into a holster that opens at the side of his leg. It’s easy to tell, crime is about to pay in a new way. 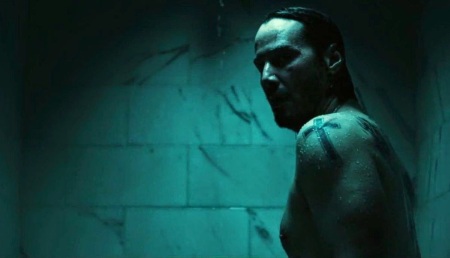 We technically meet Keanu Reeves’s John Wick straightaway; however, we don’t get our first true look at the notorious hitman until late in the first act/early second act when the gangsters who murdered his dog and left Wick for dead report home to the crime family patriarch. As it turns out, daddy isn’t so happy with what his idiot son has done. As father explains to the young criminals who John Wick is and why he’s the most dangerous man alive, we cut back to John Wick, who picks himself up out of a bloody pool in the middle of his living room before grabbing a sledgehammer and smashing away at the floor in the middle of his cement basement. After a few swings, Wick bends down and withdrawals some firepower from a hidden case. The angry monster informs his son that Wick is the man he used to hire to kill his Boogeymen. We jump back to Wick who’s now showering off the sweat and blood from the previous evening. Across his back in Latin is the phrase “Fortis Fortuna Adiuvat,” which translates to “Fortune favors the bold.” It’s a literal interpretation of Wick’s boldness but also a clue that he may have served in the Marines, which makes him a tactical threat. 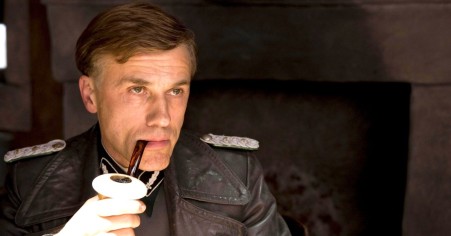 Christoph Waltz won his first Academy Award for his performance as Hans Landa, an S.S. colonel tasked with hunting down and executing Jews during WWII and as we discover during the film’s opening scene, he’s very good at it. Landa’s evil intentions become more certain the longer his conversation goes on with the humble German farmer he suspects is harboring fugitives. The initial pleasantries are slowly devoured by a sinister scowl on the Colonel’s worn face. Simultaneously, we realize that Landa is in actuality a clever schemer and a monstrous human being.

The Joker– The Dark Knight 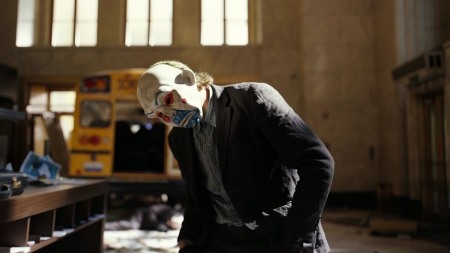 When news initially broke that Heath Ledger was cast as the Joker, impassioned fans took to the internet to share their collective disdain for the pick. The actor shut his doubters up with his very first appearance on screen. The scene in question takes place at a Gotham City bank where a crew of thugs in clown masks are pulling off an elaborate heist. The mystery of the Joker begins almost immediately as the men mention their boss in conversation. It’s quickly made known that he’s ordered each of his cronies to shoot their partners once they have the money, leaving only one to claim the entire stash. When the last clown standing removes his mask, he’s revealed to be none other than the Joker himself. What’s also revealed is the Clown Prince of Crime’s psychotic and unpredictable nature.

There you have it, my picks for the best character introductions that cinema has to offer! What do you think? Are there any of my picks that you agree or disagree with? If so, which ones and why? Sound off in the comments below and let me know your thoughts!