You only get one chance to make a first impression. The saying is true in life and in the movies. Your first few minutes with a character on screen can […]

You only get one chance to make a first impression. The saying is true in life and in the movies. Your first few minutes with a character on screen can shape how you feel about that individual and even the journey they go on for the rest of the film. That’s why a character’s introduction is important and that the execution of said introduction clues us, the audience, into the information critical to understanding how and why the character does what they do. There is an art to establishing your main characters, but most tend to be pretty forgettable. Still, there are plenty of great character setups in film history that both audiences and filmmakers can take ques from. Let’s take stock of some of those entrances now! 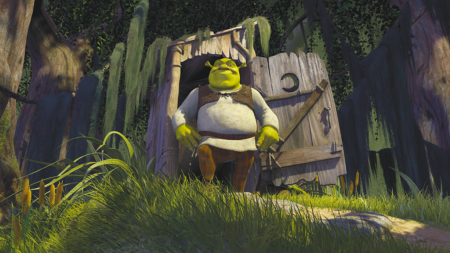 Shrek’s introduction is as amusing as it is informative. We chuckle as he uses a page from a book of fairytales to wipe his Leprechaun-green ass. We think it’s funny when his fart suffocates the fish he later eats for dinner or silly when he lays a messy smooch on the “Ogre Beware” sign sticking just out front of his secluded swamp. At the same time, we learn that Shrek lives by his own rules, but is also a pessimist who values alone time above all else. This sets up the fact for later that though content, this ogre has been hurt by the world before and is doing his best to make sure that it never is again. 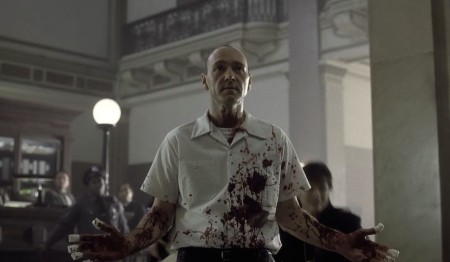 John Doe doesn’t make his first appearance in Se7en until way late in the game, but when he eventually does show up, it’s an immediately chilling moment. Kevin Spacey’s unidentifiable serial killer willingly wanders into a police station, his nondescript wardrobe stained in blood, tips missing from his bandaged fingers. Onlookers freeze, puzzled and put off by the grotesque scene unfolding in the wide-open lobby of the NYPD precinct. “Deteeeeccttiivee!” Doe’s hoarsely hollers out, grabbing the attention of the cop who’s been trying to track Doe down the entire film. Without so much as a word, you know who this man is and that he’s up to no good. You also know that he’s already one step ahead of everyone else. 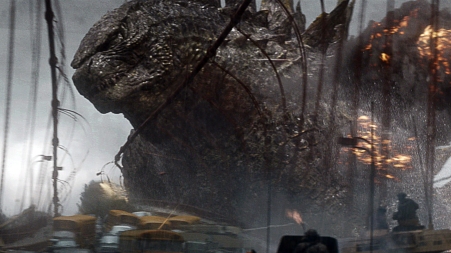 Can I call Godzilla a character? I’m not sure. But I do know that the King of Monsters makes one hell of an entrance in 2014’s Godzilla. Director Gareth Edwards utilizes some gorgeous cinematography while keeping the focus on the enormity of Godzilla during the creature’s tantalizingly paced reveal. Outside of just how big he is, we don’t learn much about Godzilla during the scene, but it gets the blood pumping knowing that he’s about the throw down with another giant beastie. The rest of the movie doesn’t quite live up to the hype of the moment, but I never tire of seeing just how strategically Edwards sets up this new interpretation of this iconic movie monster. 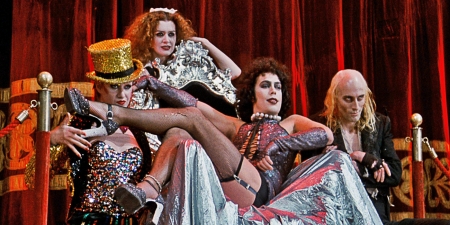 You never know what to expect with The Rocky Horror Picture Show and neither do Brad and Janet when they arrive at a secluded manor looking to use a telephone. Instead, they inadvertently crash a party bustling with strange guests who are fond of choreographed dances. Frightened and confused, the couple slowly back away, only to bump into the sinister Dr. Frank N Furter, who gleefully initiates a catchy show tune that quickly takes a turn for the weird-er. It’s a fittingly flashy entrance for a character as out of this world as the doctor.

Captain Jack Sparrow– Pirates of the Caribbean: Curse of the Black Pearl 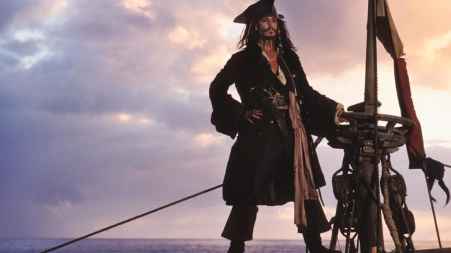 When I saw the first scene with Johnny Depp’s Captain Jack Sparrow, I knew I was in for a ride. That’s the genius of the captain’s intro. The low angle of him mounted atop a mast in combination with his confident stance and focused expression initially give off the impression that this is a man is on top of the world. It’s a brilliant opening shot because, as we come to learn with the next cut, it encapsulates how “Captain” Jack Sparrow sees himself. As the scene progresses, it’s revealed that the “ship” Sparrow is sailing is not really a ship at all, but a dingy. Neither is he sailing; instead, Jack’s just trying to stay afloat until he makes landfall. It’s funny, which is fitting because he’s a funny guy, but also a visual hint that though he isn’t quite on top of the world, this pirate is creative, quick-witted and someone who manages to get by despite his circumstances. 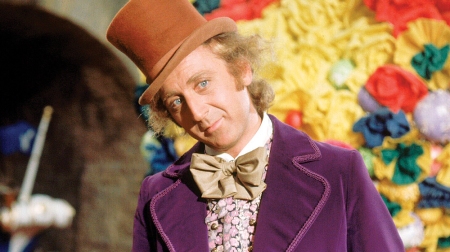 Gene Wilder gives an iconic performance as the titular chocolatier and arguably his best moment comes during the first scene in which we meet Willy Wonka. The charismatic entrepreneur limps out of the factory on a cane in a sequence that takes its sweet time. Wonka hobbles the formidable distance from the factory doors to the gate where the golden ticket winners are curiously waiting. Just before reaching his destination, the seemingly fragile man comes to a halt, leans forward, falls to the red carpet beneath him, only to successfully complete a somersault before spritely popping back to his feet where he assumes the stance of a miraculous “ta-da!” It’s a visual clue that the kids– and viewers– should take special notice because from here on out, not everything is as it seems. 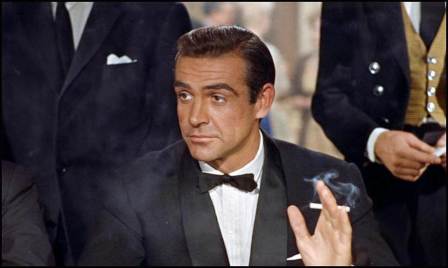 Today, James Bond is a cinematic icon. That wasn’t the case when Sean Connery first graced the screen as the smooth MI6 agent in 1962’s Dr. No. That first film spawned an unrivaled filmic legacy that all began with a slow-burning introduction and two simple words: “Bond. James Bond.” They’re the first sounds uttered from the mouth of 007 just after the camera finally cuts to our first good look at the character. At the edge of a poker table shrouded in casual smoke, a cigarette cooly dangles from the edge of Bond’s lips. As he effortlessly lights up, the now-iconic theme begins to play. Bond is a calculated individual, one who takes his time plotting his next move. His mission– nay his very life– depends on thoughtful precision and that’s communicated through every aspect of his introduction. 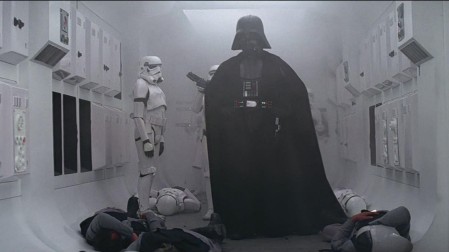 This one is admittedly a bit of a cheat, going with one character but two different films. That just speaks to the lasting impression that Darth Vader has left in his cinematic wake over the years. In both instances, swagger is the name of the game. In both films, the dark lord struts onto the scene like he owns the place. His authoritative demeanor immediately puts everyone on notice. Our initial introduction to Vader in A New Hope is one of the most memorable and impressionable entrances in movie history. When he shows up in Rogue One, his entrance is more stylized; there is more emphasis on how his shadow dominantly looms over everyone else, both physically and metaphorically.

Indy– Raiders of the Lost Ark 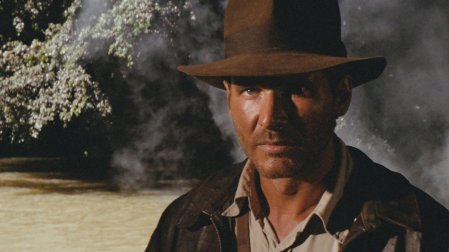 We first meet Indiana Jones in Raiders of the Lost Ark via an intro by parts. Our first glimpse of Harrison Ford’s swashbuckling adventurer by way of hi his fedora-ed silhouette as he leads a pack of raggedy men through the thick, unforgiving jungles of South America. They stop so Indy can inspect a map before coming across an arrow jutting from a nearby tree. The men behind him look at each other, confused. This clues us into the idea that this man, whoever he is at this point, is well-traveled and intuitive. Then, with his back turned towards the men, we catch a glimpse of his iconic whip as he slaps a gun out of the hand of one of the bandits trying to double-cross him. Finally, we get a frontal shot as Indy steps out of the canopied darkness and into the light, revealing for the first time that handsome mug of his. He looks pissed, but not worried. He can handle himself. In just the first few minutes of Raiders, Steven Spielberg efficiently communicates all we need to know about Indy in order to understand the situation he’s in and progress through the film.

There you have it, my picks for the best character introductions that cinema has to offer! What do you think? Are there any of my picks that you agree or disagree with? If so, which ones and why? Sound off in the comments below and let me know your thoughts!

Posted on May 5, 2019 0 By Jordan Peterson Lists Posted in Lists Tagged #A New Hope, Dr. No, Godzilla, Indiana Jones, James Bond, Pirates of the Caribbean: Curse of the Black Pearl, Raiders of the Lost Ark, Rogue One, Seven, shrek, Star Wars, The Rocky Horror Picture Show, Willy Wonka and the Chocolate Factory