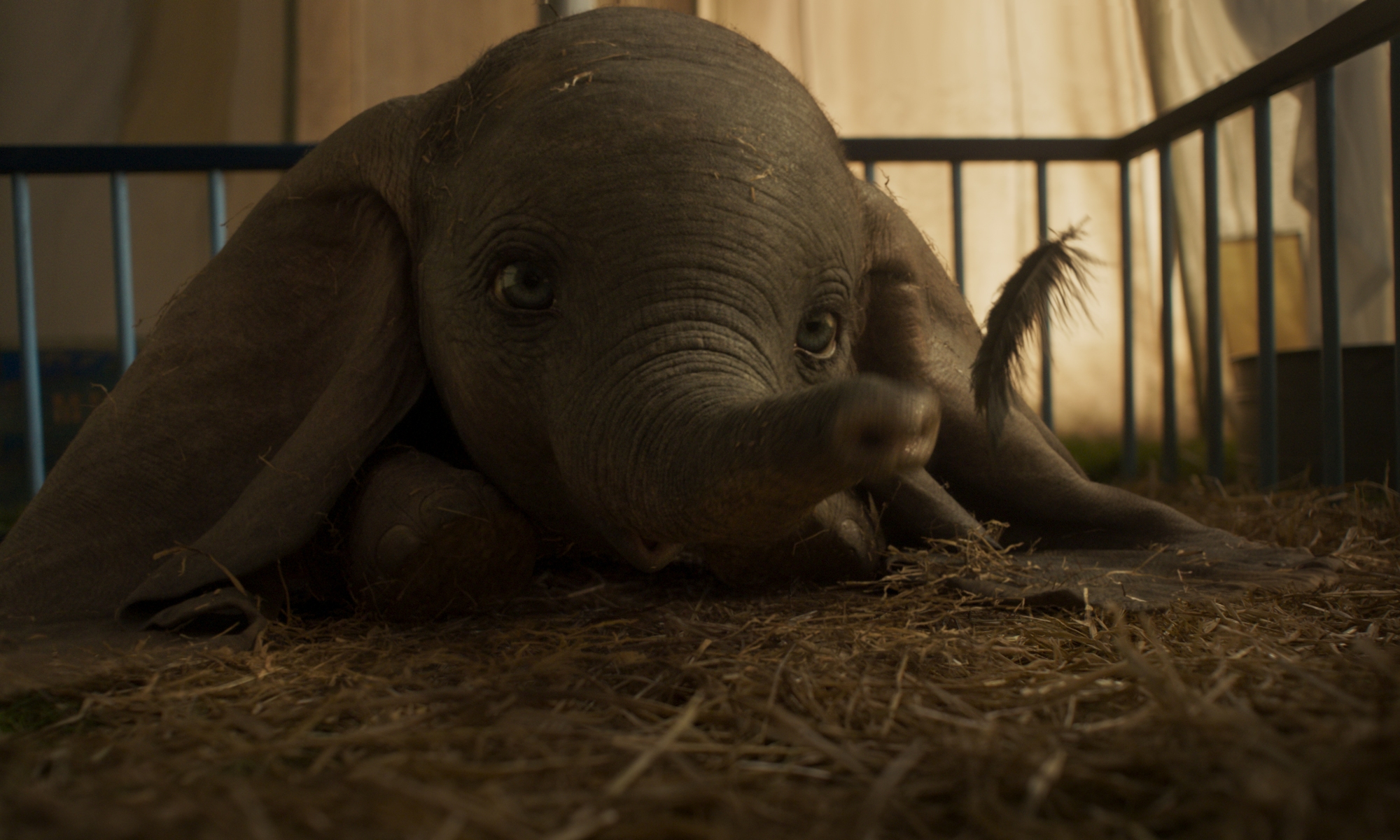 Dumbo never soars quite like its titular pachyderm. Still, it mostly manages to glide on its good intentions and heart.

Disney’s latest live-action remake exorbitantly embellishes the brief one-hour runtime of the original 1941 Dumbo (for obvious reasons). Those looking for a beat-for-beat remake will find what they’re looking for, more or less, in the first twenty minutes or so.

This is where we’re introduced to the eccentric Max Medici (Danny DeVito), who manages the Medici Brother’s traveling circus (no, there isn’t a second sibling), which has fallen on hard times when Holt Farrier (Colin Farrell) returns from the war needing his job back. Unable to oblige his old friend due to some tough financial choices that were made in his absence, but still wanting to help out Holt and his two young kids– Milly (Nico Parker) and Joe (Finley Hobbins)– Max saddles Holt with the responsibility of caring for their pregnant elephant.

When the expecting mother gives birth, Max is overtly repulsed by the newborn’s overly large ears. He quickly changes his tune when Milly and Joe teach the baby Jumbo Jr. (as he’s initially named) how to fly, relying mostly on the psychological encouragement of an otherwise mundane feather.

In these early parts of the film, director Tim Burton (Batman, Alice In Wonderland) absolutely melted my heart with his intimate relationship building between Dumbo and his mother, Jumbo Sr. It’s so adorable to see how much the two care for each other, which makes it all the more heartbreaking when Jumbo Sr. eventually gets hauled away (that’s not a spoiler, it was in the trailers). And yes, I am aware that I am talking about two elephants.

Don’t lose hope yet, little guy! The Farrier kids have a plan to reunite you with your mother, which involves exploiting your peculiar talents to raise enough money to buy her back. Eventually, the plan stirs up enough public noise to draw the attention of entertainment tycoon and business man V.A. Vandevere (Michael Keaton).

By this time, I was infinitely more invested in Dumbo than any of the human characters in the film. That may sound like a good thing, seeing is how Dumbo is the titular protagonist. However, it more-so speaks to how flat all the humans in Dumbo are written, despite the presence of such heavy-hitters on screen. The exception here is DeVito’s Max. Though I could not stand the actor’s over-delivering of his lines early on, I was slowly won over by his character’s arc, which is truly the only one fully realized among the humans.

Few actors pair ham with slime as deliciously as Keaton, so when he first appears on screen and begins his grandiose monologues, you can practically hear the hair fibers twisting in his nonexistent mustache. The performance looses its luster the longer the character is on screen. By the end, I am sad to say, the performance just becomes visual noise.

Speaking of visual noise, the visual effects work in Dumbo is uncharacteristically not up to par. In particular, the very first shot of the film made an unimpressive first impression. For the most part, Dumbo the elephant looks quite good and even cute; however, the rest of the computer-generated effects tend to fluctuate in quality throughout the film.

After the show, I walked out with a warm heart. Dumbo is the main focus here and it is my opinion that the “aww shucks!” of the animal was enough to warrant a see-through. The film around him functions as your run-of-the-mill family fare.

Have you had a chance yet to check out Dumbo? What did you think? Were you at all disappointed? Hit me up in the comments below and let me know what you thought of Tim Burton’s latest film!