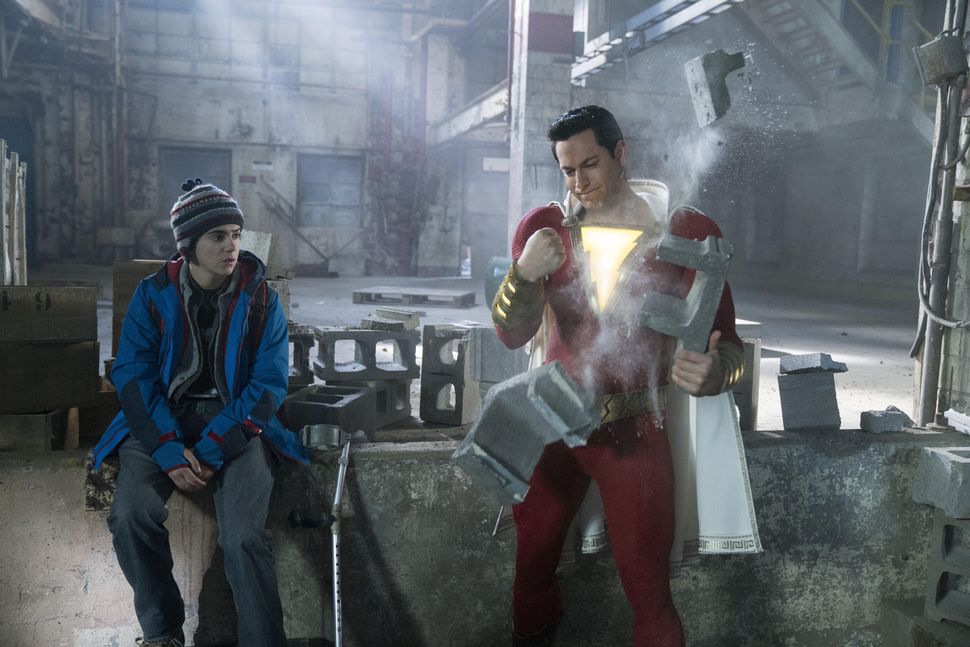 Sure, the DC Extended Universe of cinematic superheroes took off on the wrong pair of legs. Fortunately, Warner Bros. has seemingly been recovering thanks to recent entries Wonder Woman and Aquaman. It is my pleasure to share with you that Shazam! is yet another step in the right direction for DC and dare I say my favorite film of the bunch so far.

Billy Batson (Asher Angel) is an insubordinate fourteen-year-old foster child searching for his birth mother on the streets of Philadelphia when his errant actions land him in yet another foster home, this one run by the Vasquezes (Cooper Andrews and Marta Milans). The couple warmingly welcomes Billy into their spacious abode, already home to five other foster kids. Among them is Freddie Freeman (Jack Dylan Grazer), a quick-witted, obsessive superhero nerd and social outcast with a deep encyclopedic knowledge of all things to do with capes and crusading.

During his first day at his new school, Billy whacks one of the stock bullies giving Freddy his customary taunting. In turn, the macho meatheads chase Billy onto a subway train that magically transports him to the cavernous sanctuary of an old wizard (Djimon Hounsou) who’s been searching decades for someone to pass on his mantel to.

The wizard gruffly admits he has run out of time and is in desperate need of a new champion who can defend humanity from the villainous Dr. Sivana (Mark Strong), who recently came into possession of his own superpowers and is seeking global conquest (as bad guys do). Wasting no more time, the wizard imbues Billy with the powers and physique of a god, which he can access anytime simply by uttering the word “Shazam!”

Shazam! unabashedly revels in the fact that it is a comic book superhero movie. It passionately embraces its silly source material and demonstrates a sharp awareness of the current state of superhero movies. The experience of Shazam! is akin to watching/listening to someone do/talk about what it is they most love in the world and the result is delightfully infectious. Nowhere is this more apparent than in the performance from Zachary Levi, who jubilantly embodies the unbridled joy one would imagine feeling after becoming a superhero, especially a teenage kid like Billy Batson.

Speaking of which, Asher Angel breezily carries the film as the original version of Billy. He is as stand-offish as you would expect from a foster child who has basically taken care of himself most of his life; however, he is easy to root for the more he learns to accept his new family and let them into his heart.

There isn’t any shortage of heart in Shazam!. Yes, it is funny and often hilarious, but what is most surprising and most endearing about this film is that it wears its heart on its sleeve. As a result, it’s easily accessible, emotionally. While it is a blast discovering alongside Billy what superpowers he does and does not have (and boy is it!), the true joy of Shazam! comes from seeing its lovable cast of outcasts bond and ultimately become a wholesome, loving unit.

Jack Dylan Grazer, whom you might remember as the asthmatic Eddie from 2017’s IT, is also the standout here as Freddie, Billy/Shazam’s dorky sidekick. There are layers of empathy to him and Grazer makes it look easy communicating any number of emotions with a single look. There is no denying that when he is on screen, we’re witnessing a star-in-the-making.

In addition to its uproarious sense of self-awareness and lovable cast, Shazam! freshens up the superhero origin story with a third act that reinvents the big, climactic CGI showdown. To tell you how would be telling you too much. I can say that when the time came, I sank in back into my red recliner, ready to take whatever big, generic action sequence was about to come my way. I quickly perked up and was overjoyed when the film diverted my expectations for the better.

Shazam! starts slow. The first twenty or so minutes are sluggish, with too much time spent on the origin of Mark Strong’s Dr. Sivana, at least for what we ultimately get of the character. That isn’t a slight on Strong’s performance at all. He hams it up whenever he is on screen and he is definitely more magnetic than a lot of Marvel Studios’ baddies. Thankfully, things pick up once Zachary Levi pops up on screen and we get to spend a bit more time with Billy and his new family.

By the time the credits hit and the house lights clicked on, I was disappointed. I was disappointed that Shazam! was over. I didn’t want to leave just yet. I wanted to spend more time with Freddie, with Billy and with Shazam and his Shazam-ily.

This film is yet another win for Director David F. Sandberg (who previously directed Lights Out and Annabelle: Creation) and the biggest “W” so far for Warner Bros. and DC. My biggest problem with Shazam! is that I have to wait two weeks to see it again.

And yes, there are TWO post-credits stingers. One hits at mid-credits while the second drops following the end of the rolling credits.

Have you gotten the chance to check out Shazam!? What did you think of it? Sound off in the comments below and let me know your thoughts on the film!