When Jordan Peele’s Get Out hit theaters, it quickly became one of the must-see films of 2017. Positive buzz kept the movie busy for weeks until it eventually became one of the most successful independent films ever made. It even went on to win Peele his first Academy Award for Best Original Screenplay.

Since then Peele has attached himself to multiple projects (as one does after winning an Oscar), including a reboot of the beloved Twilight Zone television series as well as a new Candyman movie, which Peele himself will write and produce. Thankfully, we do not have to wait much longer for his next directorial effort.

A number of weeks ago, we got our first taste of Peele’s follow-up to Get Out in the form of a teaser poster. See below:

Though there is more to analyze in the latest poster, one detail stood out to me immediately: the similar shape of the heads and the gold-plated scissors: 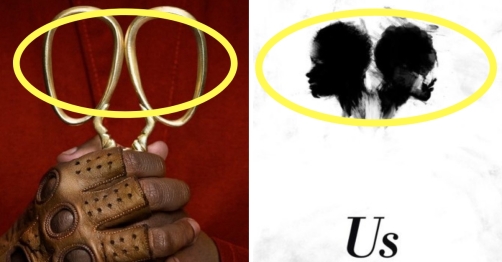 What could it mean? That is still up in the air. What we do know is that Us will star Lupita Nyong’o and Black Panther‘s own Winston Duke. And if Slashfilm is to be believed, we may also have somewhat of an unofficial synopsis. Here are what test audiences are being told the movie is about:

A mother (Nyong’o) and a father (Duke) take their kids to their beach house expecting to unplug and unwind with a friend. But as night descends, their serenity turns to tension and chaos when some shocking visitors arrive uninvited.

Sounds like Us will be taking eerie cues from Get Out, but we will get a better understanding of what to expect from the upcoming project once the first official trailer drops on Christmas. Oh, did I forget to mention that? Yeah, Peele totally Tweeted that the other day:

Us is written and directed by Jordan Peele and produced by Blumhouse. Universal Pictures will distribute the film, which hits theaters on March 15, 2019.