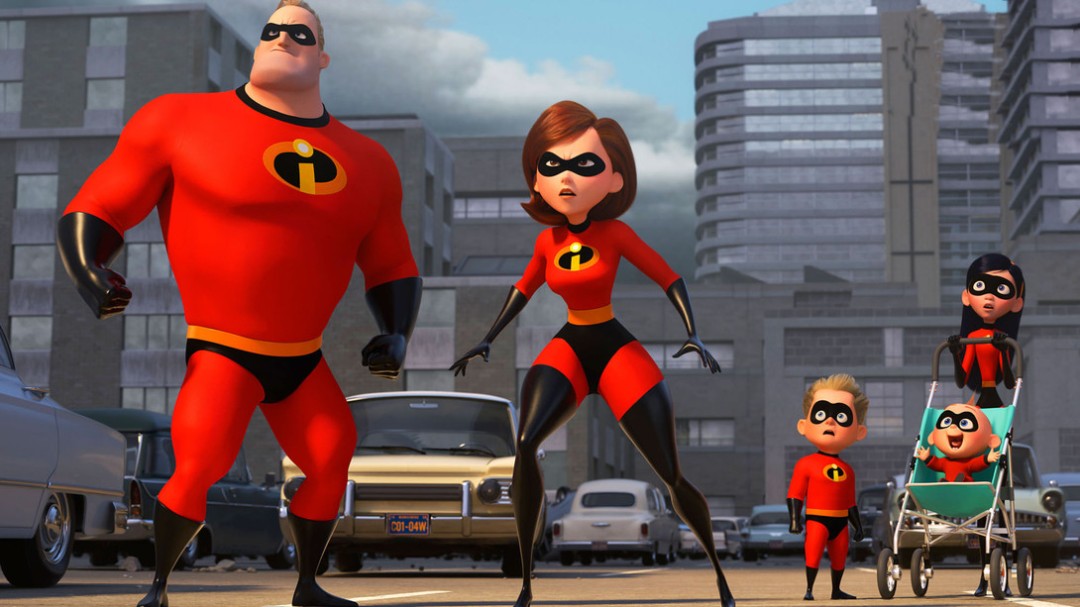 It’s easy to imagine a world in which nearly every review of Incredibles 2 mentions how long it’s been since the first ‘Incredibles’ film hit theaters. It only makes sense. Fourteen years is a long time.

It also makes sense that those same critics would then pose some form of the question “Was it worth the wait?” Allow me to nip that question in the bud, posthaste. Yes. It was well worth the wait; however, expectations should be set accordingly.

When The Incredibles debuted back in 2004, only three other movies that year featured beings with superpowers. Fast forward to June of 2018 and Incredibles 2 is the fourth blockbuster superhero film in the first six months alone.

We’ve been so inundated with superhero films over the last decade that we now know the superhero story inside and out and up and down and sideways and any other way Hollywood has thought to give it to us. Consequentially, Incredibles 2 feels more like it’s adhering to a form it helped popularize rather than reinventing it.

Still, Incredibles 2 maintains its predecessor’s charming character chemistry and whimsical sense of adventure. In this way it’s the perfect sequel.

Incredibles 2 picks up exactly where the first film leaves off with the Parr family about to square off against the heinous Underminer (voiced by Pixar favorite, John Ratzenberger). However, if you’ll recall from the first film, superheroes are still illegal and the resulting damage from the battle puts the Parr’s and other aspiring super-powered people on notice.

Enter Winston Deavor (Bob Odenkirk), a charismatic billionaire with a soft spot for supers and a plan to overturn the legislation against superheroism. It’s a plan which initially calls for a more delicate approach to saving the day, thus Helen/Elastigirl (Holly Hunter) is called upon to lead the charge.

At first I was worried that such an obvious role reversal from the first ‘Incredibles’ movie was going to come off cheap and lazy. Thankfully, after seeing it play out in context of the story, it instead feels like a natural next step for these characters. It also provides an interesting arch for Bob/Mr. Incredible (Craig T. Nelson), who is now nursing a bruised ego in addition to having to stay home and watch the kids.

In these moments, Incredibles 2 breaks from the exhilarating “Whiz! Bang! Pow!” action of a superhero thrill ride and settles into a delightful domestic dramedy a à la Mr. Mom as Bob struggles to relate to and nurture his invisible daughter Violet (Sarah Vowell), uncatchable son Dash (Huck Milner) and unpredictable baby Jack-Jack (Eli Fucile), who is just now developing his own profuse arsenal of abilities.

Each member of the outstanding cast sell their lines with an impassioned fervor. You can tell they enjoy playing these characters and their enthusiasm is infectious. Of course a lot of that credit goes to director Brad Bird (who also directed the first ‘Incredibles’), who once again demonstrates a masterful understanding of his craft, his characters and the whimsical world they inhabit.

Technically speaking, Pixar is the gold standard for computer-generated animation. Incredibles 2 is no exception. It’s arguably the studio’s most impressive work to date,  though there is so much going on at any given point, it’s easy to take for granted the jaw-dropping detail of the film’s distinctive, candy-colored retro aesthetic. One fight sequence in the dark features a particularly eye-popping visual that highlights just how much care has gone into bringing each frame of Incredibles 2 to life.

Part of what made and continues to make The Incredibles stand out amongst other superhero fares is its main antagonist, Syndrome. Being turned away by his idol sent him spiraling down a dark path and because we’ve all experienced rejection and the accompanying anger at one point or another, it was easy to understand and even empathize with his villainous ways.

Incredibles 2 lacks an equally developed villain. This becomes apparent shortly after the emergence of the mysterious Screenslaver (points for the creative pseudonym), whose hypnotic ensnaring of any  mind bold enough to sneak a peek at a T.V. or computer monitor comes across more like a desperate attempt by the film to establish relevancy with current audiences rather than a meaningful foil for our heroes. It’s unfortunate, too, because without the addition of such an emotionally resonate through line like Syndrome’s, Incredibles 2 does not pack as strong a punch to the gut as I’d like.

When it comes to staging big action set pieces, Brad Bird is as good as anyone in the business and for as exciting as Incredibles 2 is throughout, I couldn’t help but notice a lack of inventiveness in this particular area. Three– count ’em, three– of the biggest moments involve slowing down giant runaway vehicles.

While Incredibles 2 in many ways is a perfect sequel, it’s far from a perfect movie. At times it feels undercooked and even succumbs to some overused genre tropes. Fortunately,  the action is gripping and the pacing is brisk enough that you’re never far from a genuinely funny joke or tender moment between loveable characters.

How long have you been looking forward to Incredibles 2 and did it live up to your expectations? I want to hear from you, so let me know in the comments below!