In a darkened theater lit only by the reflecting luminescence of a Christie CP2000 projector, a low grumble makes itself known before momentarily subsiding then returning again with a roaring vengeance. This goes on for some time.

It’s my belly, embarrassingly enough, reminding me that the contents of the small and overpriced bag of M&M’s I purchased at the concessions stand is not sitting well with my lactose intolerance (if you happened to be in my screening and you’re reading this, I can’t apologize enough).

You may be as surprised as I was (unlikely) to discover that this is how quiet A Quiet Place really is, at least for the majority of its brief 90 minute duration. Sounds like the crumpling of a half-empty potato chip bag, the poor attempts at whispering from the folks behind you, or, in my case, the uncomfortable gurgling of bodily fluids are all amplified. If you’re easily irritated by the random and/or unnecessary noises of the typical theatergoing experience, then you may want to wait this one out a while.

That said, if you’re a fan of well-crafted, heart-palpitating creature features and don’t mind such a singular theatrical experience, then you should definitely catch A Quiet Place and ideally with an opening crowd. 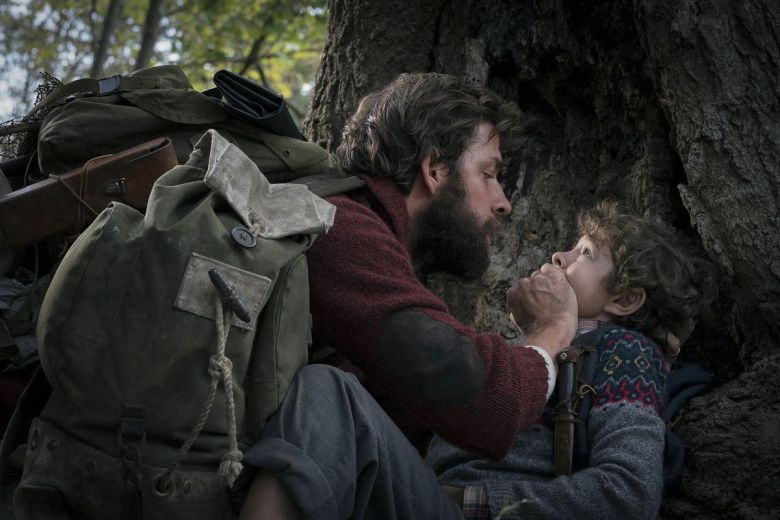 The film is sure-handedly directed by and stars John Krasinski (Jim from the American version of The Office) who costars alongside Emily Blunt. The real-life husband and wife play an iron-willed couple fighting to keep their small family silent and safe in an interestingly vague post-apocalyptic world ravaged by mysterious monsters.

Unlock typical movie monsters– your aliens, your werewolves, your demons, your gremlins or your obligatory giant versions of a terrestrial beast– these creatures are blind. They can’t see you but in a matter of moments they will activate a hyper-sensitive hearing mechanism, pinpoint your location, hunt you down and ruin you for any sound above a strained whisper.

To minimize the risk, the Abbott family– Lee (Krasinski) and Evelyn (Blunt) along with their young son Marcus (Noah Jupe) and teenage daughter Regan (Millicent Simmonds)– communicates mostly through sign language, goes everywhere barefoot, lays out sand trails atop dry forestry, and utilizes a color-coded lighting system set up in and around their isolated farmhouse.

A Quiet Place hits the ground running with a swift but potent opening scene that introduces us to this family, their world, and the stakes they’re facing. Krasinski smartly avoids heavy exposition. Rather than risk bogging the film down in heavy exposition, Krasinski mostly opts to let us fill in the blanks ourselves, which is almost certainty more unnerving than any written explanation could be.

Krasinski is no slouch in front of the camera either. Both he and Blunt are magnetic. Their chemistry transcends the fiction on screen, particularly in their more intimate scenes together. You can feel the warmth.

What’s perhaps more impressive are the performances Krasinski gets out of his terrific young co-stars. Noah Jupe and Millicent Simmonds will pull at your heartstrings portraying a loving brother-sister duo. They’re so wonderful together that I almost prefer A Quiet Place as a somber coming-of-age flick as opposed to a straightforward horror movie.

Alas, the ultimate goal of a horror movie is to scare its audience and it’s here more than anywhere else that A Quiet Place excels. Though Krasinski throws in a few too many jump scares for my tastes, he ultimately builds and sustains a taut atmosphere of pure dread throughout by utilizing a series of Hitchcockian set-up’s with payoff’s you may feel compelled to watch through your hands.

Did you get a chance to catch A Quiet Place? If so, what did you think? Did it scare you? Let me know in the comments below!