Like a tyrannosaurus in the rear view, 2017 is behind us. That means it’s time to look ahead to a new year in film. With regards to 2018, it’s probably not too far off base for me to assume that most of us are excited for “the big ones.” I’m talking Black Panther, Avengers: Infinity War, Jurassic World: Fallen Kingdom (funny enough), and the rest of the dazzling tent pole IP’s.

While nobody could blame you for eagerly doling out your hard-earned dollars to catch the cumulation of a decade’s worth of Marvel movies (I myself will be the first in line!), shiny superhero blockbusters aren’t the only game in town.

If the idea of a giant, purple alien punching spandex-sporting super-humans in the face with a magical, glowing glove makes you sweat, then you may have a taste for the absurd. Lucky for you, 2018 promises plenty of awesome absurdity. You just need to know where to find it. Allow me to point you in the right direction.

Synopsis: A teenage girl and her little brother try to survive a wild 24 hours during which a mass hysteria of unknown origins causes parents to turn violently on their own children.

Nobody sells cinema of the absurd like Nicolas Cage. In fact the man’s been out-loonying everyone for so long that it’s easy to forget he’s an Oscar winner and bringing on such a high-caliber talent to your project can only be a good thing, especially when the premise is so balls-to-the-wall bonkers. The whole thing’s made even better knowing that one of the co-writer/directors of Crank and Crank 2: High Voltage (both with Jason Statham) is behind the camera. If everything works out the way we think it can, this could be the most badass coupling since our own mom and dad. 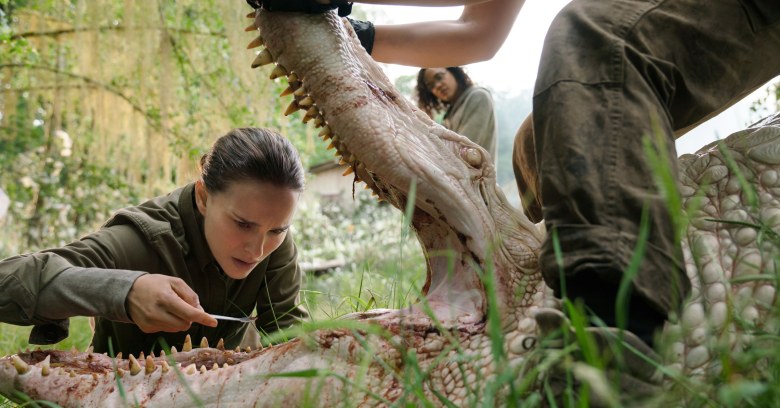 Synopsis: Based on the acclaimed sci-fi novel from Jeff VanderMeer. A team of four (a biologist, an anthropologist, a psychologist, and a surveyor) set out into a place known as Area X. The area is abandoned and cut off from the rest of civilization. They are the 12th expedition. The other expeditions have been fraught with disappearances, suicides, aggressive cancers, and mental trauma.

Annihilation will see a theatrical release beginning February 23, 2018 before dropping exclusively to Netflix some time later this year.

Synopsis: A family lives an isolated existence in utter silence, for fear of an unknown threat that follows and attacks at any sound.

Shhh. Don’t speak. Don’t laugh. Don’t fart. These otherwise harmless bodily functions could mean the difference between life and death for one very unfortunate family headed up by real-life married couple Emily Blunt and John Krasinski (who also directs). Therein lies the brilliance of A Quiet Place. Each day we make a thousand different sounds, intentionally or otherwise, without thinking. But what if each movement you made had to be methodically planned out beforehand? What if one wrong noise meant a violent end for either you or a loved one at the hands (or claws) of a mysterious beast? It’s a unique albeit stressful twist on the haunted house subgenre and I can’t wait to subject myself to it.

Synopsis: After encountering a UFO, a man recruits a shell shocked band of war vets at a nearby VA hospital to help him fight back against a member of a formidable alien species that’s marked him for death.

Writer/director Shane Black made a name for himself writing the original Lethal Weapon (starring Mel Gibson and Danny Glover). Since stepping behind the camera for Kiss Kiss Bang Bang, Iron Man 3, and The Nice Guys, Black has developed a unique style that’s equal parts quirky and subversive. Now he’s set his sights on an iconic franchise he himself helped kick off back in ’87 (Black played Hawkins in the original film). The Predator will be more than a mere cash grab. In the hands of a true storyteller like Black, who’s familiar and shares a history with the series, you can rest assured we’re in for one hell of a ride.

The Predator lands in theaters August 3, 2018

Synopsis: A deep-sea submersible is attacked by a massive creature, previously thought to be extinct, and now lies disabled at the bottom of the deepest trench in the Pacific with its crew trapped inside. With time running out, expert deep-sea rescue diver Jonas Taylor is recruited by a visionary Chinese oceanographer to save the crew from this prehistoric threat.

Jason Statham as a traumatized paleontologist taking on a gigantic, prehistoric shark. Need I say more? 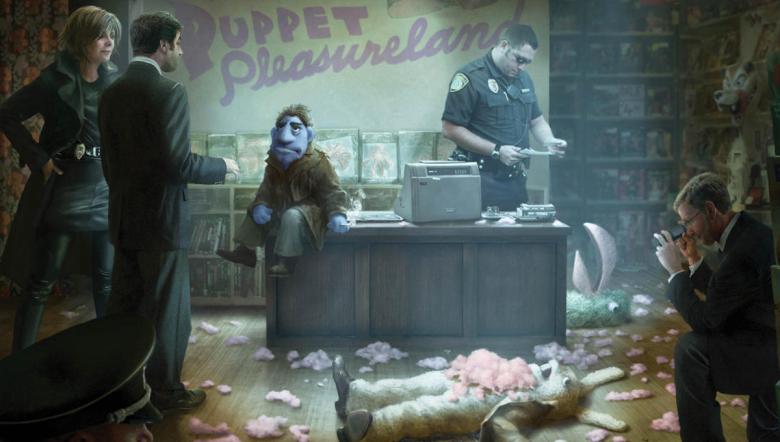 Synopsis: In a world where puppets and humans live side-by-side the puppet stars of the iconic TV show The Happytime Gang are some of the biggest celebrities around. But off camera, the family-friendly cast leads the kinds of lives that would make a tabloid writer blush. When the stars of “The Happytime Gang” are mysteriously murdered, two mismatched detectives – one a type-A, take-no-prisoners human with a secret, and the other a crass, hard-drinking puppet with a connection to one of the victims – must put aside their huge differences to stop the killings and catch the culprit, while resisting the temptation to murder each other.

Who Framed Roger Rabbit with Muppets meets Chinatown in this gritty, offbeat detective comedy starring Melissa McCarthy and Elizabeth Banks. I feel like I shouldn’t have to sell you on much else. I mean, just look at the above concept art. Those actresses in that movie? Yes please! It’s still probably worth noting that this will be directed by Brian Henson of the Henson Company and son of the late, great Jim Henson, so we know the practical effects are in the best hands possible. We’ve grown up, it’s time our puppets did too.

There you have it. Six absurdly awesome films to get excited about in the new year. What do you think of my list and what films are you looking forward to checking out? Let me know in the comments below!