The U.S. box office this August came in like a lamb and went out like a deaf and blind squirrel trying to cross I-96 during rush hour. It didn’t just die. It got stuck to the tire and repeatedly squished for miles. It wasn’t a good weekend for movies is what I’m getting at.

In fact, the box office hasn’t been this painfully slow since 9/11. How slow is painfully slow, exactly? Well, the top 12 performing films combined couldn’t crack $50 million. It was so slow that The Hitman’s Bodyguard, starring Ryan Reynolds and Samuel L. Jackson, was able to take the top spot for the second week in a row with just over $10 million. Yikes.

Things aren’t going to get any better this weekend. There aren’t any new wide releases dropping. The closest thing to it is the 40th anniversary re-release of Steven Spielberg’s seminal sci-fi piece Close Encounters of the Third Kind. If you love that film (and a lot of people do), it’s definitely worth checking out on the big screen, especially in its newly re-mastered state. However, if you’re looking for something a bit more recent, there is good news.

Some truly great movies are still playing in theaters right now. Here are a few suggestions.

Winder River is the cap to writer Taylor Sheridan’s unofficial American Frontier trilogy in which Sheridan exposes the marginalization of fringe American cultures. Here he takes the reigns as a first-time director and the result is well worthy of Sicario and Hell or High Water. Jeremy Renner gives another Oscar-worthy performance as a game hunter with intimate ties to the Native Americans of the Wind River reservation who is recruited by an inexperienced FBI agent (Elizabeth Olsen) to help solve the murder of a young native girl. The more the intrigue builds, the more Sheridan reveals and juxtaposes the unforgiving natures of both man and his environment. It’s a captivating murder mystery and throughout I felt the chilling influences of films like The Silence of the Lambs. Wind River is a haunting film featuring a haunting performances.

Good Time may not be for everybody but that doesn’t disqualify it from quietly being one of the best films of the year. Robert Pattinson (yes, the twinkling vampire from the Twilight movies) is spellbinding as a sociopathic lowlife who embarks on an insane misadventure through the bleak criminal underbelly of New York in order to raise the ten-thousand dollars he needs to bail his autistic brother out of prison and ruins the lives of everyone unfortunate enough to cross paths with him. It’s a consistently fascinating, often disturbing character study– in the vein of Martin Scorsese’s Taxi Driver or Dan Gilroy’s Nightcrawler— that explores the consequences of delinquency, desperation, and loneness.

Baby Driver hasn’t been quite as quiet as Wind River or Good Time at the box office, but like them it’s one of the best movies this year. There is a quirky, witty flare about writer/director Edgar Wright that shows in all his films. It’s also a big reason for why his films stand above the typical genre fares. Now Wright sets aflame the crime thriller genre with Baby Driver, a consistently funny and charming character study about a young getaway driver, named Baby (Ansel Elgort), who’s always listening to music to drown out the ring of Tinnitus in his ears. Wright cleverly infuses the film’s exciting action sequences with a flare of Baby’s character by syncing said sequences perfectly to Baby’s kickass playlist, so we’re constantly learning new things about Baby. Elgort confidently leads a stellar cast that includes Kevin Spacey, Jon Hamm, and the scene-stealing Jamie Foxx. At times Baby Driver feels a bit paint-by-numbers, but it’s got an infectious charm and energy.

Detroit deserved a much larger audience than it got. Oscar-winning Director Kathryn Bigelow re-teams with Oscar-winning Screenwriter Mark Boal (The Hurt Locker, Zero Dark Thirty) to recall the 1967 Detroit Rebellion, specifically the gratuitous murders of three African American men that took place at the Algiers Motel by local police. Bigelow notably conveys the chaos of raw cruelty suffered at the their hands. Will Poulter gives an Oscar-worthy performance as the racist cop who heads up the brutal interrogation and ultimate murders of those innocent men. His work will repeatedly have your head shaking and stomach churning, as it should. Detroit is a powerful, timely film that had me gripped and gasping all the way through.

War for the Planet of the Apes 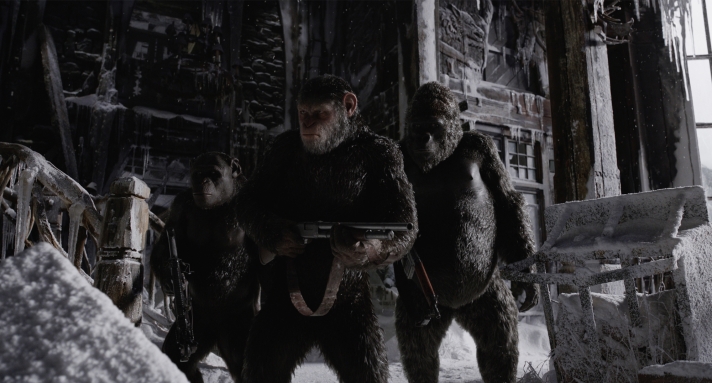 The rebooted Planet of the Apes trilogy that began with Rise of the Planet of the Apes back in 2011 is the single, greatest trilogy of the 21st century thus far. That’s right, I’m not afraid to say it. It’s impossible not to empathize with Caesar (Andy Serkis) through the course of his emotionally nuanced ark, from grieving house pet all the way to selfless king. Andy Serkis’s riveting performance as Caesar works in tandem with some of the year’s most impressive visual effects to not only make you believe that these characters are apes, but to make you feel for these apes along their journey. Woody Harrelson gives a strong turn as Colonel, the main foil for Caesar who has his own agenda for the apes. It may not deliver on the promise of an action-packed war movie, but War for the Planet of the Apes is a more than satisfying conclusion to an outstanding trilogy.

Those are just a few of the many great films still playing in theaters. Take advantage of this extra-slow week and check one, or two, or all of them out and let us know which ones you hit up!