The flick of a switch was all it took for last year’s Lights Out to transition from fractured family drama to bone-chilling creature feature. This simple yet clever hook solidified David F. Sandberg as an original voice within a genre otherwise cursed by convention.

If the original Annabelle was anything, it was conventional. How many similarly lame haunted house flicks feature the happy family that falls victim to some demonic presence that they unknowingly let into their home? I cringe imagining the number.

Now Sandberg inherits Annabelle’s unholy mantle and with it is tasked with crafting an unnecessary prequel to a spin-off nobody wanted. And though it’s just his second film, Sandberg whittles Annabelle: Creation with expert detail despite the lingering presence of a familiar formula.

The minute Sister Charloette (Stephanie Sigman) and the small band of orphan girls she looks after step into the massive, decrepit farmhouse that will become their new home, you know exactly how things are going to play out. It will be quiet at first with a bump in the night here and there until the tension slowly ratchets past ten to a climactic third act throwdown with whatever supernatural entity is antagonizing our poor protagonists.

And for the most part, Annabelle: Creation delivers on those story tropes. However, the focus here is on the scares and Sandberg cleverly utilizes tools of the trade to construct a relentless house of horrors. Lighting and composition perfectly capture the eerie stylization of The Conjuring universe and the manipulation of sound consistently forces your imagination to do the heavy lifting when most of what you’re seeing is pitch black.

Once Sandberg starts showing you glimpses of what’s actually dwelling in the darkness, it lives up to any anything you might have concocted in your head. Special and practical effects often come together, often seamlessly, to create terrifying images that will permanently burn into your mind.

Sandberg also makes inventive use of the environment. Sure, we get a small sense of the layout of the house at the beginning while the Mullins’s playfully terrorize their young daughter Annabelle, but we don’t get to truly explore the old mansion until years later when the orphans arrive. The camera snakes in and out of corridors, establishing the larger physical space as well as specific details that all come into play once everything goes topsy-turvy. 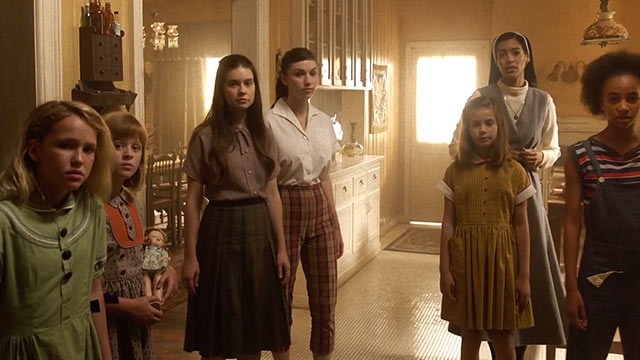 But technical prowess alone doesn’t get an audience emotionally invested. They have to care about the characters in order to care about what’s happening to them. Thankfully, the heart of ‘Creation’ belongs to Lulu Wilson (Oujia: Origin of Evil) and Talitha Bateman. Respectively, they play Linda and Janice, two orphans who are so close that they are practically sisters. In fact, they’ve made a pact to be adopted as a pair. Their deep love for each other is heartwarming and provides an emotional anchor the film.

The love doesn’t stop there. While the sisterly bond between the young orphans might have been enough to pull an audience in on its own merits, Sister Charlotte gets in on the love too. She plays the role of the orphans’ mother/big sister and it’s easy to tell she cares for them in that way. Stephanie Sigman does a nice job portraying both the loving and strict sides of Sister Charlotte without ever leaning too far into one or the other. It’s easy to root for these girls once the evil enters their lives.

What did you all think of Annabelle: Creation? Was it better than the original? And are you now open to seeing more horror movie prequels? Let us know in the comments below! And if you’re interested, check out our list of the best horror movie prequels of recent memory.