Thankfully, Hollywood averted a looming writers’ strike back in May. So can somebody please explain why it still feels like nobody bothered showing up to the writer’s room for Transformers: The Last Knight?

I get gruff for it, but I actually enjoy the first live-action Transformers movie from a decade ago. It has a good understanding of itself and never takes itself too seriously. Like its animated source material, it whole-heartedly embraces the ridiculousness of giant, alien robots turning into cars and fighting each other. Most importantly, though, it features a coherent story with somewhat relatable characters, which is something the other films seriously lack. 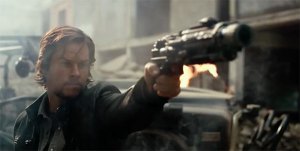 It’s sad then to see that Bay seems uninterested in addressing this long-standing critique of the series in ‘The Last Knight’ (that or he’s completely oblivious). Again the emphasis for Bay is on beautifully framed action set pieces and not the cartoonishly dull characters who occupy them.

If you care about Mark Wahlberg’s Cade Yeager at all during this movie, chances are it’s because you saw the previous film. Here Cade’s a shell of his former self. Instead of organically developing through character decisions, it feels like he is being artificially manipulated through an indecipherable narrative via convenient, clunky dialogue. It’s obvious by Wahlberg’s undying deer in the headlights look that even he’s not sure what’s going on. That’s no mark against Marky Mark; rather, it speaks to how dense and dumb the script is.

Adding insult to injury, Bay has miraculously managed to annoy me with Sir Anthony Hopkins, one of my all-time favorite actors. He plays the head of a mysterious organization in charge of keeping safe the secret history of the Transformers, although I couldn’t tell you why or how that’s done. Whatever their techniques, it seems the cat is out of the bag and Hopkins is out of his mind, or at least his character is: constantly babbling on and ceaselessly insulting everyone around him. Eventually, shaking my head became a reflex each time he opened his mouth.

Wahlberg and Hopkins may be the sexy names atop the marquee, but Transformers has always been about Optimus Prime and the best stories always pit the Autobot leader against his nemesis Megatron. One of the more exciting additions to the cast is Frank Welker, who returns to voice the dominate Decepticon for the first time in this live-action run (with no explanation for the character’s apparent resurrection). Alongside Peter Cullen, there is novelty in hearing the two original voices together again but neither one gets significant screen time.

Like everyone else in this movie, the pair are unfortunate victims of an over-bloated script that doesn’t much bother itself with what makes the most sense story-wise. Major characters move around the world with no explanation as to how, major damage from epic fight scenes just disappear, and looming conflicts are easily explained away as if they never happened. After a numbing while of exposure, I began to question my own competency.

Despite his blatant disregard for these characters or their story, Bay knows how to shoot action. This is readily apparent throughout these films, ‘The Last Knight’ included. The problem is that most of it becomes digital noise because we’re not invested in the outcome and we’re not invested in the outcome because either we don’t care about the characters or we don’t spend much time with the ones we do care about.

What did you all think of Transformers: The Last Knight? Or did you give up on the franchise a long time ago? Let us know in the comments below!