Whether you love it or hate it or find yourself somewhere in between, Warner Bros. and DC have struggled to garner unanimous critical success for their ongoing live-action cinematic universe (aka: the DCEU). In the world of animation, however, nobody does superheroes better. 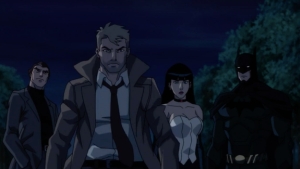 A large part of this success is thanks to Director Jay Oliva, who has proven time and again a prowess for this world and its characters after the critical successes of previous DC animated adaptations like The Dark Knight Returns and The Flashpoint Paradox. Though Justice League Dark doesn’t quite live in the same realm as those films as far a telling a comprehensible story goes, it does conjure up a refreshing take on the genre.

Right out the gate the film takes advantage of its harsher R-rating as ordinary citizens begin committing unspeakable acts of horror against one another. After the O.G. Justice League quickly concludes that black magic is behind the commotion, Batman soon finds himself on the doorstep of the House of Mystery and its eccentric tenant John Constantine. Fans of the short-lived NBC series Constantine can rejoice knowing Matt Ryan is the guy lending his Welsh tones to the charismatic occultist in the scene-stealing role.

Other character introductions play out like short horror stories with strange, otherworldly twists. These aren’t your typical swoop-in-and-save-the-day hero types who got their gifts from a radioactive spider bite. They are a deeply conflicted, broken bunch of magical misfits and a nice change of pace for anyone interested in sinking their teeth into edgier, more mature super-powered material.

In fact, these characters are so interesting that I was let down by the film’s quick pacing and short 80-minute runtime. I wanted to spend more time exploring what makes each antihero tick and their relationships with each other, especially since there are so many of them to delve into. Instead, certain characters are relegated to one or two scenes with sparsely any dialogue.

I found this to be especially troubling when it came to Swamp Thing. The film hints at the rocky history between he and Constantine but instead of letting that play out through the course of the film, DC opted to give the screen time to Batman. From a marketing perspective this move makes sense, but Batman neither has mystical abilities nor is he a believer in magic despite witnessing much of it himself during the film (which just makes him seem inattentive). The result is that Batman isn’t given a whole lot to do here outside a couple of neatly choreographed though ultimately pointless action sequences. 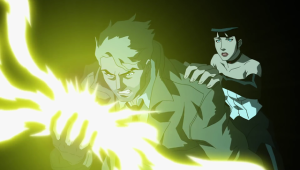 The film’s pacing and runtime also negatively affects the narrative. Some plot points are simply skimmed over for the sake of getting to the next action setpiece. Though you’ll likely have questions about what exactly is going on, the film never spends much time explaining itself because its characters have already moved on to the next scene.

Though occasionally I wasn’t entirely sure what was going on, I was never bored. That’s a testament to just how interesting these characters are and Oliva’s attentiveness to the details of their personalities. Even if I didn’t get to spend as much time with them as I’d liked, Justice League Dark is still an imaginative, fresh entry into DC’s animated catalogue.

What did you think of Justice League Dark? Let me know in the comments below!